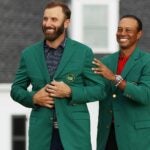 DJ’s last Tour win came at the 2020 Masters. The former No. 1 is posting good scores. But data shows that it’s more important to post them in “bunches.”

Golf can be fickle, even for the greatest players in the game. Consider the model of consistency known as Dustin Johnson. Between 2008 and 2020, DJ had at least one win on the PGA Tour in 12 of 13 calendar years, missing out only in 2014. He started 2021 as the top-ranked player in the world (Dustin’s cumulative total of weeks ranked No. 1 is 135, third all time behind Tiger Woods and Greg Norman) and finished the season ranked third, completing another fine campaign that included a victory in Saudi Arabia (then a European Tour event) and eight top 10s. And yet he failed to win on the PGA Tour.

As a group, players with larger Strokes Gained Totals (effectively, lower scoring averages) rack up more wins. But low scores alone aren’t always a guarantee. Many great players posting impressive numbers have endured winless seasons. In 2014, for example, Jim Furyk was ranked fifth in the world but wound up winless for the year. Rickie Fowler had a trophyless 2018 on the PGA Tour but ranked in the World Top 10 the entire season.

Here’s the rub: It’s not just how you score; it’s also when you score.

Streaky play — posting good scores in bunches — is what matters. It increases a player’s chance of winning. I measure a player’s streakiness for the season by “S,” a number between zero and 1 (with an average of 0.5). The streakiness measure S depends only on the ordering of a player’s Strokes Gained Total for all rounds in a season. Its precise definition is too involved for this column, but the first “alternating” player in the example above would get a streakiness value of zero and the second player a value of 1. A player’s chance of winning increases with a better season-long SG Total (better players win more), and it further increases when good scores are bunched.

Sometimes, the S in streaky can stand for “surprise.” In 2021, Phil Mickelson ranked 158th in SG Total—not a recipe for a world-beating season. And yet Mickelson won the PGA Championship. How’d he do it? He bunched three of his best SG rounds for the season (4.8, 6.5 and 3.0) and none of his worst into that one event. His streakiness value for the season was a lofty 0.93. (By comparison, Furyk’s winless 2014 came with an S value of 0.40, while Fowler’s winless 2018 came with an S value of 0.27.)

DJ’s S value in 2021? It was 0.35, well below his average streakiness value of 0.62. He played well enough to win; he just didn’t “bunch” his best rounds. Mr. Consistency could use another streak.