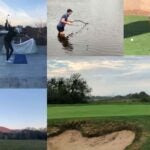 Golf provided a much-needed respite for our staff in 2020.

As we prepare turn the calendar page to January 2021, we can’t help but reflect on the year that was. It goes without staying that putting 2020 in the rearview mirror will be a relief for all of us, but as you’ll see from our annual tradition of showcasing our favorite photos from our phones, despite everything the year has put us through, many of us managed to find much-needed joy, laughter and relief by turning to the game we all love. So farewell, 2020. And cheers to all the New Year will bring.

After Bethpage Black tormented my golf fears for the better part of two decades, I finally grew the gall to play for the first time in July. In my infinite wisdom, I’d missed forecasts of an impending monsoon and forgotten to bring a jacket. One of my playing partners grabbed this shot of me soaked to the bone on hole No. 7, smiling from ear to ear. Golf is the marriage of love and idiocy, and in this shot, I’m little more than an idiot in love. —James Colgan

My favorite photo of the year comes from my first solo golf outing of the pandemic, when I got out for an evening nine holes at Taconic GC in Williamstown, Mass. — some 10 minutes from my parents’ house, where I’d retreated from New York City. Golf courses were re-opening across the country, and it felt so good to spend a couple hours off our street. What I didn’t fully realize was just how important golf would become for so many people this year: It was an incredible resource for distraction, recreation, interaction, competition. And it was safe, too. This was the beginning.
—Dylan Dethier

This photo reminds me of what a strange and difficult year it was. Never in my life did I think I’d be hitting a foam ball, off a yoga mat, into a tapestry, on a roof, with the NYC skyline in the background. But when Covid shut down NYC in March and April, this was the only form of golf I had. It was a tough year, but I also learned a lot. About struggle. About loss. About perseverance. And about resilience. I was also reminded just how much this dumb game means to me. Golf might’ve looked different this year, but it’s helped many people — myself included — cope with the tragedies that surrounded us in 2020. —Zephyr Melton

I’m lucky that the people I work with aren’t just my colleagues, they’re my friends. So when the time came to shutter-up indoors to slow the spread of the Coronavirus, it wasn’t just scary, it was sad. It meant saying goodbye, for now at least. As the newness became normal, I began sneaking-in a few rounds with various GOLF.comers. There was my thrilling-but-oft-disputed one-hole victory over Josh at Bethpage in June; me and Doug’s thrilling victory over Rob and Jason in July; my thrilling “wolf” victory over Tim in August, and of course, me and Sean’s thrilling victory over young guns James and Zephyr in October. The problem is I’m notoriously bad at remembering to take pictures on the golf course. But I do have one — this one — a semi-staged photo of our two Drop Zone hosts, Dylan and Sean, hitting from a drop zone during our round the Monday after the Masters last November. The day ended with Sean and I clocking a victory over Dylan Dethier and John Sodaro — in thrilling fashion. But all jokes aside, it’s those rounds of golf — those normal, casual, trash-talking rounds with friends – that I think of when I look at this picture. And they’re rounds that 2020 has made sure I’ll never take for granted again. —Luke Kerr-Dineen

This September, I started playing golf again after a lengthy, years-long layoff, and quickly became re-obsessed with the game. Marine Park Golf Course, a windswept, oceanside muni in my hometown of Brooklyn played a big role in that. This photo, showing One World Trade Center looming in the background, is from my very first round back, a twilight 9-hole walk at MPGC. It marked the beginning of my return to the game, a fortunate trend experienced by so many golfers during this unfortunate year.
—Kevin Cunningham

In August, right after the PGA Championship, my wife and I took a car trip to Vermont, and for the only time this year, we played golf together. Actually, we did more than that at Green Mountain Golf Course. We drank beers. We were outdoors. We laughed. We cried at my tee shots. Covid might as well have been on another planet. It was all great.
—Nick Piastowski

This might be cheating, but I’m using a screengrab of a video I took back in April. I was still living in New York City when it became the epicenter of COVID-19. Each day felt more dreadful than the last. I spent nearly every waking moment for the better part of two months in a studio apartment. The thing I did most to pass the time was chip ping pong balls. It wasn’t much, but it was the distraction I desperately needed — and my neighbors most certainly did not. I couldn’t even begin to tell you how many times I tried to get the ball to stay in this mug. My face shows pure jubilation after miss after miss and collection after collection of the six balls I would hit at a time. This might have been the only time I smiled during some dark days. I’m thankful for that apartment, ping pong balls and Bud Light for getting me through to brighter days. —Tim Reilly

For someone who’s used to being on an airplane roughly half the year, this photo represents my first trip in eight months — a quick flight to Arizona to help conduct our yearly player test at Silverleaf Club. It’s a reminder of how much I missed being on the road doing the things I love the most: talking to golfers about gear and spending time with my GOLF colleagues. After two days of rigorous testing with more than 40 golfers, this was the last club standing on the back end of a picturesque range. It’s impossible to complain about your job when this is your office. —Jonathan Wall

I didn’t do much during 2020, but a last-minute trip to Houston for the U.S. Women’s Open helped me snag this shot of Lexi Thompson going full send. While this is an amazing shot of an amazing athlete, I love what it represents: my progression as a member of the GOLF.com team. When I switched careers two years ago, I would have never thought I’d be sent off to cover a major or take a photo that would set off a viral Twitter debate, and it just reminds of how far I’ve come and how motivated I am to keep evolving in everything I do. —Rachel Bleier

I am so obsessed with this photo. 1. It makes me long for the month of February, when watching celebrities hit range balls was normal. But really, there’s just so much happening in it. You’ve got the greatest golfer of all time standing on the range at one of the best courses in the world, watching Alex Rodriguez take cuts with a grungy set of irons. A-Rod, of course, is wearing all black besides a white, woven belt, and has casually tossed the credential over his shoulder. To his right is Chris Pratt, Hollywood megastar who isn’t much better. And way over to the left is a pregnant Blair O’Neal absolutely striping it and making them look like chumps. It was quite entertaining. —Sean Zak

A couple of weeks before the virus became a very real part of everyone’s daily lives, I snuck away for a short golf trip to Hilton Head Island with three friends. (This was in late February.) In what was a clear precursor of the gloomy year to come, Day 1 of the getaway greeted us with lashing rain. Naturally, we played golf anyway. The course we were scheduled to play was closed, so we called around and found another option just a few miles from our rental house. There were few highlights in that round (we only got six or seven holes in), but one moment does stand out: my buddy’s tee shot on a watery par-3. A moment after impact, he lost control of his slick-handled 9-iron and we all watched in awe as the club helicoptered into the pond in front of us. Kerplunk. Glug, glug, glug. Down she went. Recoverable? My friend thought so. Wasting no time — and with little regard for his own safety or dignity — he quickly removed his pants, socks and shoes and waded into the murky waters, a long stick in one hand for dredging the pond’s squishy depths. He was like Jean Louis-Michel looking for the Titanic, only with slightly lower stakes. From the shore, the rest of us barked directives, as if we had any idea where the missing club had settled: A little to your left! No, your other left! OK, now out a little farther! He scraped and prodded and pulled and … nope, never found it. Fortunately, he also avoided something else: gators. As we learned over the next couple of days, courses in this area are teeming with them, which, of course, makes the whole episode even more ridiculous. Dumb times, fun times, immortalized in about a hundred iPhone snaps. Here’s one of them. —Alan Bastable

My friend Jofie Ferrari-Adler, at a public course on a brackish bay, playing out of an unraked bunker, in deference to the pandemic. Bunkers don’t need to be raked. Golf needs to be played. Now more than ever.
—Michael Bamberger

This is my favorite photo of the year for many reasons. Snapped on the morning of February 16 in our backyard, it was about three weeks before our son was born, and right before the U.S. was engulfed in Covid chaos. My daughter, then 3 years old, was happily swiping away at the ball with her plastic club, bedecked in her favorite princess gown of the moment, complete with matching accessories. I love that the giant dress didn’t bother her as she took every swing, that this moment in time represents both sides of her personality: over-the-top girly girl and rough-and-tumble toddler. But I mostly love remembering how hitting a little ball brought her joy and a sense of pride and satisfaction, as it brings us all. —Jessica Marksbury