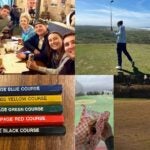 Thanks to the game we all love, 2021 gave us many memorable experiences.

It’s hard to believe the new year is already upon us. Here at GOLF, it has become an annual tradition to showcase our favorite photos from our phones in an end-of-year roundup. From time spent with family to new experiences on the course, 2021 brought us unexpected joy and laughter, thanks to the game we all love.

Cheers to you and yours as we prepare to welcome 2022, and bid a fond farewell to the most memorable moments of 2021.

Unlike Tiger Woods, I’ve never taken part in a father-son golf event. My dad didn’t play, and my 16-year-old son, Leo, doesn’t either. But every now and then, he and I get to hang out on the course together. That’s not Leo in the picture. It’s a border collie named Paint, one of many representatives of his breed around the country that are trained to chase geese off golf courses. This image is a screenshot from a video Leo and I produced about Paint’s early days on the job at Corica Park Golf Course, in Alameda, California. Leo, who is better with a camera than he is with a golf club, did the filming, capturing a lot of pretty footage that you can see in the finished product here. I mention all of this to put the image into context. But those details are  secondary to me. What sticks with me is not so much the picture or the subject but the memory of how the video came about. It happened during long hours spent on the golf course with my son. That alone made it time well spent. —Josh Sens

My nephew, the trash-talker. My favorite golf picture of the year also came during my 13-year-old nephew’s favorite golf moment. This year, we played our first round together on a “big” course (which I wrote about here), and on the 445-yard, par-5 16th, at Moor Downs Golf Course in Waukesha, Wis., on Monday, Aug., 2, 2021, I made a par — and Mason made a birdie. After which he took the brown scoring pencil in our cart, wrote down our scores, then drew about 10 circles around his four and scribbled in an arrow pointing up below it. Just in case anyone was forgetting who beat whom that hole. Lord help me when his 18-hole score is lower than mine. Brat. —Nick Piastowski

This is a picture from February in Seattle on the second floor of the driving range at the Interbay Golf Center. Golf in any form in February is a super-bonus. Interbay has tremendous hot dogs at reasonable prices. I am a man of simple pleasures. The photo itself isn’t much to write home about; I’m holding my phone in one hand and the hot dog in the other, after all, with a golf bag slung over my shoulder. But yes, that’s a mildly toasted bun.
—Dylan Dethier

When I look back on 2021, I’ll remember it fondly. It was, after all, the year I hit my first ever jump shot: A clutch fadeaway off an assist from Bryson DeChambeau in GOLF Top 100 Teacher Chris Como’s Living Room Lab. It left GOLF’s Sean Zak, the man holding the camera for this one, gobsmacked, but I could spot a glint of pride in his eyes. It lifted my career 3-point percentage to a Hall of Fame trajectory 100 percent. Having unraveled the mysteries of that sport, I thought it a good time to retire and re-focus my attention on golf. —Luke Kerr-Dineen

Claire joined the GOLF team about a year ago and we became fast friends. Fast ~virtual~ friends, that is. She lives in Rhode Island and I’m in New York City, but between Slack calls, voice memos, Snapchats, texts, etc., we talk almost every day. But, when we went to Champions Retreat in mid-November, it was actually only our second time meeting in real life — what strange times these continue to be. Our visit was a cocktail of great friendship, great golf and great hospitality, which is why this is one of my favorite golf photos of 2021. —Emily Haas

Our caddies at Bandon Trails told us we wouldn’t be able to get the entire round in before darkness descended on the course, so we decided to prove them wrong. Instead of cutting the day short after a mere 28 holes, we sent our loopers back to the clubhouse and opted to sling our sticks the rest of the way. I wouldn’t recommend playing any of the Bandon courses without a caddie —  it’s worth the price for the assistance on the greens  — but there’s something magical about strolling the fairways at Bandon in the gloaming. Even better? We got the round in with daylight to spare.
—Jonathan Wall

The Bethpage Gauntlet: 90 holes, 36 hours, countless blisters. Would I ever do it again? No. Is it one of my favorite golf memories of the year? Absolutely. —Zephyr Melton

As Tiger and Charlie Woods demonstrated at the PNC Championship, the game of golf is a family affair. My dad, Kevin, gives my girlfriend, Lindsay, a swing path lesson in their first round together. They share the tee box here, but Dad isn’t playing today. He’s walking the course for the first time in four months after tearing his Achilles’ tendon. My father has always been a model of perseverance and generosity. He’s walking miles and hitting full wedges long before doctors told him he could, and he’s very invested in helping Lindsay improve her game. She’s a sponge, a former college athlete, and loves competing against herself. Lindsay is new to golf, but I think she’ll be giving me strokes by next summer. This shot from a brisk October morning reminds me how much I love them both. And how grateful I am to the game of golf for bringing them closer together. —Connor Federico

There’s an old saying in golf-course architecture: take what the land gives you. Same can be said for what the sand gives you. On a desolate Costa Rica beach last summer, I took that mantra to heart when out of nowhere a beautiful little par-3, or at the least the bones for such a hole, appeared before me like a vision. Elevated green, babbling creek, tee box. Can I get an Amen?! Eerily, all the other necessary accoutrements were also within reach, as if this hole had just been waiting to come to life: a discarded piece of burlap for the flag, a long narrow branch for the stick, coconuts for tee markers. There was even a washed-up piece of wood, painted red, that made for a perfect hazard stake. Now if only I’d brought my clubs.
—Alan Bastable

I’m so obsessed with this photo. To someone who doesn’t know golf, it says absolutely nothing. But for the 2020 Olympics it says everything. In the foreground, there’s Stefan Schauffele, using his one good eye to look through his monocular at his son, way over there across the fairway and under the trees. Xander had blown his drive on 14 so far right that it brought O.B. into play. He might have been collapsing, but it’s hard to tell! That’s what 150 yards of distance through a magnifying glass looks like. Oh, and all those people in the blue and white ombre shirts? Those are volunteers who were also decidedly not cheering for Xander. Hideki was their man, in the same group, chasing the gold. Stefan was stoic and calm, whispering advice to his son, a full 9-iron away. Xander took his drop, pitched out, wedged on and two-putted for bogey. Avoiding double is what makes him one of the best players in the world, and it put him atop the podium just an hour later. —Sean Zak

​Monday, Dec. 13. Near five, near sunset. Looking up the ninth and last hole at the St. Martins course at the Philadelphia Cricket Club, in the city limits. Our match was tied standing on the last tee. One of us two-putted from 25 or so feet for a par. The other of us made a 15-footer for a birdie. Does it matter who did what? A still night, winter coming. It’s good.
—Michael Bamberger

If photos are a fair proxy for a year, then I’ve had a damn good one. There were so many options from which to choose, from my paragliding tour over Torrey Pines to the LIFE-CHANGING gas station Mexican food I ate while covering Bryson’s bid at the long drive in September. But ultimately, there could really only be one selection — this one. I snapped this photo shortly before exiting the press center at Augusta National on Masters Saturday evening. My week in April marked the fulfillment of a life dream — my first Masters ever, and my first as a member of the media. Three generations of my family had dreamt of going to Augusta, and as it is for many others, the tournament is a very unique part of my family tapestry. It’s difficult to capture how mind-bending it was to see my name etched into a physical piece of the tournament, or to explain how it felt to wander Amen Corner late on Sunday afternoon. The best I can muster is that it was probably the single most fulfilling moment of my life. I’d like to thank every member of the GOLF staff who helped me that week (and they did ALL help me). It was simultaneously the coolest and most intimidating seven days of my career, and their grace and general good will made it a memory I’ll cherish forever. —James Colgan

Going into 2021, the only golf trip I wanted to make happen was to Bandon Dunes. I put it out there, and then it became a reality. I used to think people might be overhyping Bandon and I left knowing it’s impossible to hype it enough. The place is that pure. It’s as good as it gets for a golfer, and this photo will serve as a daydreaming reminder for years to come.
—Tim Reilly

In November, I took my first work trip in nearly two-and-a-half years to GOLF’s Top 100 Teacher Summit at Pinehurst. It was just a couple of days, but it was such a refreshing experience. Not only did I have the chance to reconnect with colleagues in person for the first time in a long time, I finally got to actually meet some of our newer staffers, like Claire, Connor and Zephyr. It was a great reminder of the reason we love this game so much: the unique and hugely satisfying way it brings people together. —Jessica Marksbury