Amy Alcott became a Hall of Famer in 1999, but joining the club of course designers has been tougher 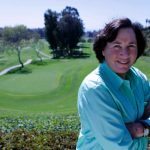 The next class of inductees to the World Golf Hall of Fame includes Tiger Woods, Tim Finchem — and Marion Hollins. Miss Hollins, as she was known in her day (she died in 1941), will be the first woman course architect in the hall, where she will live for eternity alongside her friend Alister MacKenzie. MacKenzie’s masterpieces include Cypress Point and Augusta National. Both might have been lesser works were it not for Miss Hollins. The good doctor once wrote of her, “I do not know of any man who has sounder ideas.”

But after Marion Hollins — unless the late Alice Dye, Pete’s wife, is someday elected — there won’t be another woman architect voted into the hall for a long time. That’s because there are so few women designers working at all today.

Many of America’s most prominent architects since the advent of color TV — including the original Robert Trent Jones — made their names selling brawn. So 1981. Golf is way better when it’s in touch with its feminine side.

The other day, I was on a Zoom call sponsored by the Shivas Irons Society. At the end of it, a woman of a certain age, an accented physician, had a remarkable insight. She said (and I paraphrase) that golf is so absorbing because it connects us to the masculine and feminine sides that live deep within all of us.

The captivating thing about Augusta National is that regardless of the demands it makes from each of its teeing grounds, the holes become more interesting and intricate the closer you get to the cup. It’s all those humps and hollows and curves. The course is both macho and ladylike. (Seve played his greenside pitches like he was making a soufflé.) History has not recorded Miss Hollins’ precise contributions there, but we can all guess.

When Amy Alcott, the LPGA star, heard that a golf course was going to be built for the 2016 Olympics in Brazil, she had a creative breakthrough: The course should be designed by a male-female design partnership. Intentionally or not, she was recirculating the legendary pairings of Pete and Alice and Alister and Marion. Alcott lives in Los Angeles, where Gil Hanse was renovating the Los Angeles Country Club. They started comparing notes. They complemented each other.

Ultimately, they presented themselves to the International Golf Federation as a team. “And then everybody else started doing the same thing!” Amy told me recently. She wasn’t being literal. But Annika Sorenstam and Jack Nicklaus joined the sweepstakes as a coed design team. So did Greg Norman and Lorena Ochoa. And Peter Thomson and Karrie Webb. Gil and Amy got the job, an almost impossible one. Their assignment was to create an environmentally responsible course that could challenge elite men and women golfers at the same time, create jobs in a poor part of Rio de Janeiro and provide an enduring and playable course for a country with almost no golf culture. In the end, the course they built, the Olympic Golf Course, was a home run. In the half decade since its opening, Amy has done a little course design consulting. But only a very little.

“It’s a tough, territorial business,” she said. Also, her taste is out of favor right now. She likes trees. “They’re cutting down way too many trees on courses these days,” she said. “It’s like giving them a lobotomy.”

Tom Doak, the iconoclastic architect, is as progressive as anyone in golf, and he has hired talented women as design associates through the years and offered guidance as they have sought to become solo practitioners. There are no obvious success stories. “It’s a hard career for anyone,” he said by email. “Trying to be a pioneer as a woman on top of that is doubly hard, starting with the fact that nearly all of the clients are men. You should ask developers why they haven’t hired woman designers!”

Construction, of every kind, skews male. But golf does not. It needs designers like Marion Hollins and Alice Dye and Amy Alcott.

“You still hear people say ‘men’s tees’ and ‘women’s tees,’ ” Alcott said. “There should just be tee colors and descriptions: forward, middle, back. Play from wherever will make you happiest.” Gender be damned.