Fans may be banned from the PGA Tour’s return, but that doesn’t mean they’re not watching 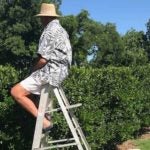 A fan watches from a ladder.

FORT WORTH, Texas — Fans aren’t permitted this week at the Charles Schwab Challenge, the PGA Tour’s much-anticipated first event back after a three-month hiatus. But that wasn’t going to stop Gary DeFain from taking in the first-round action Thursday.

On a warm, sun-splashed afternoon, DeFain came prepared with a straw Panama hat, cigarettes, a cooler of drinks and a six-foot ladder, which he set up by a fence line at Colonial Country Club to give himself a view of the 4th green and 5th tee.

DeFain wasn’t on property at this eerily quiet event, but he was still in the game.

“I brought my ladder out here last week to test it out,” he said Thursday.

“I can see the entire 4th hole [a par 3] and all the way down the 5th fairway. Is that Jimmy Walker over there?”

Indeed it was, as confirmed by another fan, Chris Zelda, who had squeezed between some bushes and a chain-link fence for a glimpse of Rory, Jordan and the boys.

“This is where I’m supposed to be,” said Zelda, handwritten pairing sheet in hand. “I’ve been coming to Colonial since 1988, and I wasn’t going to miss this.”

DeFain and Zelda were among the army of Fort Worth golf fans who on Thursday were aching to be part of the Tour event that means so much to this part of North Texas. At Joe’s Pizza House less than a mile from the course, patrons stared longingly at TVs playing the telecast. Across the street from the 1st fairway, the Kroth family and their friends relaxed in a luxury box, complete with portable restrooms.

“I would love to be watching Rory play in person. I would love to see Brooks,” said Fort Worth insurance agent Robert Dean, as he peered up from his lunch at a big-screen TV. “I would just love to be a Colonial right now watching golf and drinking beer.”

For longtime Fort Worth resident and Colonial member Michelle Marlow, when life gives you lemons — in this case the best field in Colonial’s history but no fans — you make lemonade. Literally.

For years, Marlow and her four sons, along with other neighborhood kids, have operated a big-business lemonade stand next to the event, with the tens of thousands of dollars in proceeds going to local charities.

And they’re at it again this year, meager foot traffic be damned.

“We were lucky to get this (tournament) in and we had to get creative,” said one of Marlow boys, George. The kids are accepting donations and hoping golfers and caddies will stop by and contribute on their way to and from the course.

The stand is the stuff of local legend. Phil Mickelson dropped by a few years, paid with a $100 bill and refused change.

“I remember Jim Furyk came into the house one time to give me an impromptu golf lesson,” Henry Marlow said.

Thomas Marlow jumped in. “He listened to me doing my piano recital.”

Fort Worth’s Chris Stenholm has been a Colonial member since the early 1990s and has worked on the tournament committee for years, but even those credentials didn’t get him on property this week. Still, he wasn’t going to change his annual tournament routine while standing outside the fence and peering over the brushes.

“I think most people are in disbelief,” he said of golf-loving locals who can’t attend. “They can’t believe we are actually having the tournament out here this week.”

While the disappointment of not being able to watch the game’s superstars cuts deep, the financial pain of not having fans in and around Fort Worth cuts even deeper.

Dave Feigel, who owns the Silver Fox Steakhouse next to Colonial, said he typically hosts at least one sponsor dinner with a PGA Tour player at his eatery. That business quickly dried up when the Covid-19 virus scare shifted the tournament dates from late May to mid-June.

Reata Restaurant, in downtown Fort Worth, is a customary spot for Colonial winners to celebrate, as well for players, caddies and sponsors to dine. But general manager Russell Kirkpatrick said he had yet to spot a familiar golf face this week.

Title sponsor Charles Schwab sent only three employees from its West Coast headquarters, and is not entertaining any clients. Schwab himself was a no-show because of possible health risks. He is 82.

“Every single year for a decade they sell tickets out here,” said Imman Hannah, who usually rents out space in front of his gas station to ticket sellers. “Every year they pay me to be here. Now nobody can go and nobody can pay.”

Jamal Anderson, who works at the Extended Stay America hotel less than a mile away from the course, tried to look at the bright side.

“At least they didn’t cancel the tournament,” he said. “The Byron Nelson in Dallas — it’s canceled, it’s gone. A lot of people canceled events, but the Colonial is still here and we need the help.”