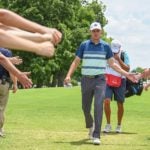 A revised Texas state order will allow fans to attend outdoor professional sports events during the coronavirus pandemic, including the PGA Tour’s first tournament after a three-month hiatus, the Charles Schwab Challenge in Fort Worth.

The Tour said “right now” it is sticking to its plan to not allow fans.

Last Friday, Texas Gov. Greg Abbott issued a revised proclamation allowing spectators at outdoor events up to 25 percent of the venue’s capacity, though it was not publicly announced, according to the Fort Worth Star-Telegram. The revision came four days after Abbott announced pro sports may resume in the state, albeit without fans.

“It was brought up again in another call with the doctors, and the medical team said that they could move forward with 25 percent capacity,” John Wittman told the Star-Telegram.

The Tour won’t at the moment.

A Tour spokesman told the Star-Telegram that “our focus right now” is playing the Charles Schwab Challenge, from June 11-14 at Colonial Country Club in Fort Worth, without fans. Brad Townsend, a reporter for the Dallas Morning News, tweeted Thursday afternoon that the tournament director, Michael Tothe, said the proclamation won’t affect the tournament. “No changes. No fans. Too late to change,” Townsend tweeted Tothe as saying.

In announcing its revised schedule in April after ending play after the first round of the Players Championship in mid-March, the Tour said it would play its first four tournaments without fans. Thursday also revealed it might be longer.

News of Texas allowing fans comes on the same day that the Tour announced that the first tournament to allow spectators, the John Deere Classic in Silvis, Ill., would not be played this year due to “local- and state-related challenges related to gathering restrictions.” Illinois’ reopening rules would allow for gatherings of only up to 50 people by the time the tournament would be played in mid-July.

The Tour said it would replace the John Deere Classic with a new tournament.

“Because of the ongoing health and safety concerns related to the coronavirus pandemic, the difficult decision was made to cancel the 2020 John Deere Classic,” John Deere Classic tournament director Clair Peterson said on a release on the Tour’s website. “While we considered several alternatives for the Classic, this was the choice that made the most sense for our guests, the players and the Quad City community at large.”