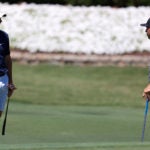 Rory McIlroy and Sergio Garcia converse from a safe distance at the Charles Schwab Challenge.

Now that the fellas on the PGA Tour are re-entering our collective consciousness in their usual space — on the telly — there’s a temptation to say that things are returning to “normal.” They’re returning, to be sure. But this “normal” is new and shifting. The only normal thing is that guys who are used to being on the road are back on the road.

Some drew satisfaction from being home for a while, like Harold Varner III.

“I played a lot of golf,” he told reporters over video conference (another change) on Tuesday. “I installed a septic tank. I built a shed. All kinds of stuff. Everything I’ve wanted to do, I kind of — Oh, I laid some sod.”

Rory McIlroy played a bit, and laid by the pool plenty, too. “It’s probably the most tanned my pasty Irish skin has ever been, so that’s been about it,” he said.

That was more substantive than Sungjae Im’s recollection of lockdown. He said he spent a bunch of time watching shows and movies on Netflix, though when he was pressed to name one, all he could muster was the fact that the movie starred “the actor from Thor.” (Cover thine eyes, Chris Hemsworth fans.)

Oh well. This week’s only sod-laying will happen from the tight lies at Colonial Country Club, and pros shuttered up in Tour-approved hotels will peruse whatever Netflix titles they’ve not already run through the last three months at home. Here’s what else we know about how it’s all going down this week on the players’ side.

Most players were tested at home first. Every player was tested upon entry to the event. Not every player enjoyed the experience.

“The needle up my nose is the craziest thing. Yeah, that was nuts,” Varner said, eyes wide. He added the good news later when he found out in real time that he’d tested negative.

Jordan Spieth called the swab test his most uncomfortable moment. “There was nothing comfortable about it.” Chesson Hadley suggested his test administrator had scraped the bottom part of his brain.

But the negative test was no sure thing. Ryan Palmer, the event’s unofficial playing host, said he’d been particularly cautious in the preceding weeks but was still uncertain. “I won’t lie to you, I was kind of nervous waiting for the results of both [tests], because I don’t know if I have it or not. Symptoms are so — you can’t really tell. Those were some interesting moments waiting for those results.”

Like several top pros, Jon Rahm arrived via NetJets, although not without a slight hiccup — an hour after takeoff, Rahm got word that his bags hadn’t been loaded onto the plane, which meant a quick turnaround to pick up his clubs and clothes. Oops!

“It’s kind of like, welcome to life again, right? Where things can go wrong. You can do nothing but laugh about it, honestly,” Rahm said. That sounds about right.

For Im, this week just means another hotel room. The reigning Rookie of the Year plays so much that he doesn’t keep a home base in the U.S. and spent the last couple of months at Saddlebrook Resort in Tampa, Fla.

Dustin Johnson said there were constant reminders as he completed the check-in process.

“Obviously we get our temperature checked when we pull in and get asked a few questions about if we’ve been in contact with people with Covid-19.” He has not and was therefore allowed entry.

Not every player is staying at a suggested hotel, though. Justin Thomas and Rickie Fowler plan to split housing — and a chef — the next few weeks. (Jason Dufner’s in residence this week, too.)

“We felt like one, the most convenient or the safest possible option, and then two, the most convenient was to get houses and bring a chef every week,” Thomas said. “We have a chef with us who’s going to be there every single week, we have him for the next three weeks, and Rickie and I are sharing houses, so we just had dinner at the house last night. We’re having pretty much every meal in the house.”

Koepka said he felt plenty safe himself but acknowledged that there’s a level of uncertainty associated with a hotel, even if it falls inside the Tour’s “bubble.”

“I know guys are staying in a hotel. You never know what’s going on in that hotel, if somebody has it that might check in. There are all these different things,” he said.

Thomas proudly announced that he’d passed through every Tour protocol and was ready for play. “I’ve done the testing. I’ve gotten approved. I have my pass that gets me in the locker room, that gets me in the clubhouse, dining. I have my pass to go in the facility and got my dad the instructor pass. It really wasn’t that hard.” All that was left was picking up his Titleists for the week.

Rahm acknowledged that there was a bit of strangeness in the now-empty locker room.

“Obviously you need to be careful when you walk by somebody. We usually walk past each other constantly in the locker room. You can’t just go to somebody and like fist bump like, ‘How you doing,’ unless you Purell right away.”

Ah, the Purell. Im was among those who noted just how prevalent hand sanitizing stations were around the course, each getting a workout.

Spieth acknowledged one side effect of no fans: It had sped the process up. “I will tell you we did play faster today in a practice round,” he said. “In general I think Monday through Wednesday will feel easier to players, and then once the tournament starts, I think it’ll be weird because we’re used to being able to use the energy of the fans and feed off of them, and we love having the support.”

When it comes to following the Tour’s rules that require players and caddies to maintain social distance, the response seemed … mixed.

Koepka is splitting a house with his caddie Ricky Elliott, so he sees little sense in staying far apart on the course. “You look at any other sport, I’m pretty sure LeBron James isn’t going to worry about setting a pick when there’s contact about social distancing. Football you’re not going to worry about tackling a guy because of social distancing. It’s just one of those things.”

You could make the argument that it is not, in fact, “just one of those things,” but we’re already on to Koepka’s buddy Dustin Johnson, who echoed those sentiments.

“My brother is my caddie, so I’ve been around him the whole time, so I’m not worried about anything like that,” he said.

Spieth made it clear that he and Michael Greller expected to be comfortable around each other. “We’ve talked at length about where we’re staying, how we’re traveling, pretty much doing it all together so that it ensures that we both have that kind of trust on each other as far as spreading the disease,” he said.

Thomas acknowledged there will be slip-ups; McIlroy asked for patience from the viewing public. Both said they’d do their best.

“We’re so used to a routine that it’s going to be hard to just be constantly aware of the situation we’re living in,” Rahm said. “At some point somebody is going to slip.”

And then comes the first tee. The tournament part. The hitting and the counting.

Thomas was happy to admit that he’ll be expecting some early jitters. “Honestly I think the hardest thing for me is just going to be getting back into it,” he said. “The fact that that four-footer I have on the first hole matters, and yeah, if I hit this ball in a hazard, okay, that’s a penalty stroke, or a penalty area or whatever, and it’s real.”

Koepka was, unsurprisingly, less vulnerable. (That’s kind of his thing.)

“Did you get nervous when you arrived today to go write something?” he asked a reporter. “There’s no nerves. It’s just — that’s my job.”

Kevin Na was sure he’d be slipping into muscle memory early and often. “I’m sure you’ll see guys dropping putts and they put their hand up and realize there’s nobody there,” he said.

Rahm took that a step further.

“Can you imagine if somebody makes a 30-foot bomb on 18 to win the tournament? Nothing? Crickets? It’s going to be a little weird,” he said.

Varner, eye on the purse, said he’d be unbothered by the lack of fans. “For the amount of money we’re playing for it’s kind of easy to get up for it,” he said. “If I make a putt to win, I don’t really care if anyone is there, to be honest with you.”

We’ll know more when Palmer puts his tee in the ground Thursday morning. One thing is clear: How this all goes is important.

“Honestly I think we need this week to go off without a glitch,” he said. “I mean, we need to make sure this week is great, not only for the world of sports but our Tour. I think if we come off this week and the fans get a great show and no cases, I think it’s going to be a huge success for the Tour, for our fans, for the sporting world.”