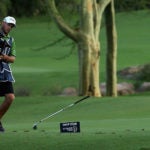 Darren Fichardt tosses his club during an event in 2013.

Sunday, during The Match: Champions for Charity, Tom Brady was struggling. He hit shots left and right. He hit shots in the trees, out of bounds and in the water. As Brady pulled up to his fourth shot on the 7th hole at Medalist Golf Club, Charles Barkley, a golf announcer that day and a struggling player himself every other day, even challenged Brady to a match.

The broadcast muted Brady’s response. He was swearing.

Seconds later, Brady holed out from the fairway.

“Take a suck on that, Chuck,” Brady said as Barkley laughed.

It turns out that there might be a correlation between that good shot and the swearing, especially if the F-word was used.

An experiment by Richard Stevens, a British psychologist from Keele University, in 2009 suggested that swearing can increase pain threshold, according to the Science Alert website, which was reported by the Fox News website. Stevens had people immerse their hands in ice-cold water, and swearing allowed them to withstand more pain.

In another experiment, whose findings were published in April, Stevens and a colleague found that use of the F-word increased pain threshold when compared to the use of a neutral word and two made-up swear words, according to Science Alert. People again placed their hand in ice water and repeated one of the four words every three seconds.

“While it is not properly understood how swear words gain their power, it has been suggested that swearing is learned during childhood and that aversive classical conditioning contributes to the emotionally arousing aspects of swear word use,” the researchers wrote in their paper, according to Science Alert.

Kyle Thompson, a five-time winner on the Korn Ferry Tour, said the research didn’t need to be done.

“Golfers have known this since golf was invented,” tweeted Thompson, who left professional golf in 2019.

“If this is the case I should be permanently numb,” he tweeted in response to Thompson.

Parkinson's took the game away from this avid golfer. Now, this program is giving it back

Q&A: Defending U.S. Open champ Gary Woodland reveals the one shot he'd like to have back