‘Expect anything different’: The best of Tiger Woods (and Charlie!) at the PNC Championship 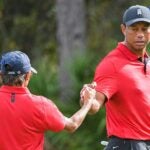 Tiger Woods and son Charlie Woods on Sunday after a birdie on the 2nd hole at the Ritz-Carlton Golf Club.

Red on Sunday. At the top of the leaderboard on the final day, too. And Dan Hicks dusting off “expect anything different.” Close your eyes, and 2021 felt a whole lot like 2001.

Then again, this certainly wasn’t the PGA or Open Championships. It was the PNC one, a parent-child, scramble, pre-holiday event, on a forgiving Ritz-Carlton Golf Club. Then again, there Tiger Woods was, days short of a 10-month anniversary of a car crash that left him, at one point, facing the possibility of right leg amputation, running up the leaderboard, despite a noticeable limp. He hit fairways. All of ’em. He stuffed irons close. He cleaned up on the greens. And when he didn’t, son Charlie did. From holes 7 to 17, no pars, no bogeys, only birdies.

In the end, the nearly inconceivable run came up two shots short. Team Woods’ 25-under total, after a ridiculous 15-under 57 during the final round, finished second. In the end, too, you probably didn’t see this coming. Even if you closed your eyes and imagined.

This may have been a “hit and giggle,” Woods’ term for the PNC. But you, Tiger Woods fan, were smiling. Below is the best of everything from Woods’ second competitive round since late February. Along with some of the worst.

The best. Team Woods was tied for the lead after 17, Tiger and Charlie each were in the fairway from the tee on 18, and even the Grinch had a goosebump or two. And then …

The worst. From 237 yards out, Tiger hit right of the green, father and son each chipped past the hole, and neither could make a 6-foot comebacker. Though, admit it: 10 months ago, 10 weeks ago, shoot, even 10 days ago, you would have taken Tiger in contention on the 72nd, win or lose, and thanked Santa, right?

There were a few, but we’ll go with his tee shot on the par-3 17th, where every player in the field played from the same tees, and Charlie, all of 12 years old, hit it closer than any of ’em, his shot falling to 4 feet left of the pin (and with water left of that).

The Sunday red, on father, son and even daughter Sam, who was watching from inside the ropes for a second-straight day, was no doubt a moment.

As it was on Saturday, Sunday’s best shot came on Woods’ second on the 529-yard, par-5 3rd, when, after a drive in the fairway, and from 176 out, he knocked it to 7 feet. Notably, the ball was on the upslope of a drainage ditch and also tested his surgically repaired leg. “There was concern with pushing off the right leg,” Jacobsen said. Team Woods finished with an eagle three on Charlie’s putt, and father and son moved into the lead.

It came on the 363-yard, par-4 7th, where, after Charlie hit to 6 feet, Tiger hit to about 6 inches. Charlie tapped in for the birdie three, and dad never left his cart.

It’s hard to argue against any of them — Tiger hit 13 tee shots and hit 13 fairways. Let’s go with shot one on the 453-yard, par-4 9th, where, after electing not to hit a tee shot on Saturday, he hit one on Sunday, picked up his tee and didn’t bother looking where it landed.

It came on the 193-yard, par-3 12th, where he flew the green to the left. Charlie followed with a shot to 8 feet. “Way to go, kid, you bailed me out again,” Hicks said on the broadcast.

How did Tiger Woods look?

Good. Better than Saturday’s first round. But the right-leg limp was noticeable, especially when Team Woods was moving up the leaderboard and Dad was tapping into 15-time-major-winner Tiger more than 10-month-removed-from-major-surgeries Tiger.

That all being said, it was the first 36 holes of golf he had played, amazingly, since last year’s PNC. (Woods had back surgery after the event.) And he and his 12-year-old son shot a scramble 57.

Work. On Saturday, Woods said it would take hitting “thousands upon thousands of golf balls” to get back to Tour form.

Of course, you’ve come this far and want something more definitive. Also Saturday, none other than Lee Trevino said he knows when — not if — Woods will return. You heard it here last then — he’ll play in 2022, and the first start will come at the Open Championship and St. Andrews.

“I don’t think there’s any question — he’s in full grind mode.” Koch on the broadcast.