‘He already told me’: Lee Trevino knows when Tiger Woods will play next 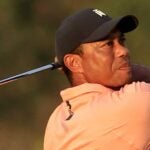 Tiger Woods hits a shot on Saturday on the 18th hole at the Ritz-Carlton Golf Club.

Lee Trevino says he has the answers to this week’s two biggest questions. So let’s get right to it.

How is Tiger Woods playing this week?

Gotcha. And when will he play again?

“I know when he’s going to play and when he’s not,” Trevino said.

Hard stop from there. Call it one and three-quarters of the answers. In Woods’ first competitive play since his car crash in late February, Woods played well — if not occasionally great — with son Charlie in the parent-child PNC Championship. And Trevino did say “when” and not “if.” But he left it at that.

His answers came in response to a question on a scene on Friday, when, after the pro-am at the PNC, Team Woods walked down to the end of the range at the Ritz-Carlton Golf Club, where Trevino and his son, Daniel, had set up shop, and for about 15 minutes, they hit, talked and laughed. The Champions Tour social media team captured about two minutes of it, and on Saturday, Trevino was asked for more.

“See now that I’ve turned 82, I’m in Vegas every week. It stays in Vegas,” Trevino said. “We had a great conversation yesterday. It’s beautiful. It would make headlines. You write about it, and if it was visible, you figure it out. You write stuff, anyway, that’s not true, so go ahead. I read it every day.

“You’re not getting nothing from me. I know when he’s going to play and when he’s not. He already told me all that stuff. He and I are good buddies. We’ve been good — I’ve known him since he was 8 years old. Appreciate him very much. I know what he’s going through. I’ve gone through these back operations and stuff, and whatever time limit you give him, he’ll beat it.”

As for when Woods himself believes he’ll play again, there’s uncertainty. On Saturday, he and Charlie shot a 10-under 62 in the scramble event.

“It’s frustrating when I don’t hit the ball as far as I know that I can and the shots that I see don’t come off the way I want,” Woods said after his round. “I hit two good shots today — well, three, they came off exactly how I wanted to. By old numbers, but as I explained to you guys down in the Bahamas, I don’t have endurance. I haven’t played. This is, what, my fourth, fifth round the entire year. I don’t have any golf endurance.