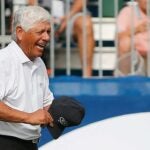 Lee Trevino on Saturday on the 1st hole at the Ritz-Carlton Golf Club.

ORLANDO, Fla. — Jim Thorpe, a PGA Tour fixture in the 1980s and ’90s, was watching the golf here on Saturday. He likes watching the golf, the PNC Championship, the old father-son event. Somebody asked Thorpe, “In your life, who have you met that knows the most about golf?”

Ben Hogan, the man who made the 1-iron cool. His name, which never goes dormant, is even more in circulation now, as Tiger Woods attempts to do what Hogan did more than 70 years ago, return to golf after a devastating car accident.

“Well, Hogan and Trevino,” Thorpe said, refining his answer. Lee Trevino was nearby at the time, here at the Ritz-Carlton Golf Club. Trevino is 82 and playing in the PNC for the 24th-straight time. He’s the only person to have played in all of them. As a golf mind, Trevino is at the Mensa level.

If you’re on a golf course during a lightning storm, Trevino once said, hold up your 1-iron. Why? “Because even God can’t hit a 1-iron,” Trevino said.

It’s a hoary old line, but worth trotting out, right about now. This is an event, like the Masters and not many others, where the game gets handed down, one generation to the next.

Trevino landed in the game when Arnold Palmer was at the height of his powers, amid golf’s glamor-boom, the swinging ’60s. Trevino can talk about Palmer all day and into the night — if he’s in the mood. That’s a notable if.

This is an NBC Sports event. You could also say it’s an Arnold event. Arnold was an NBC guy and a denizen of Orlando. The corporate roots of PNC are in Pittsburgh. Arnold was a Pittsburgh guy and welcome in all its banks. (Palmer didn’t like debt. Banks like to lend money to people who don’t need it.) Standing on colorful elevated stages, in strategic spots throughout the course, were Cadillac vehicles. Arnold was Cadillac guy.

Palmer is the patron saint of this event. Now that he’s gone — dead a half-decade already — there is Trevino and there is Gary Player and there, believe it or not, is Tiger Woods.

This event is a chance for golf to do what golf can do, hand the game down one generation to the next. That’s why Trevino’s presence here is important. That’s why the most meaningful thing to happen here this week, on some super granular level, was for Trevino to give a lesson to Charlie Woods, Tiger’s 12-year-old son. Tiger watched. That’s all he did. He watched. There’s a lot to be said for that.

“Trevino is such a golf genius,” a reporter asked Woods Saturday night. “What was it like for you watching Trevino give a lesson to Charlie?”

“He wasn’t really giving a lesson to Charlie,” Woods said. “He was just talking. Like he does. I got a chance to be around Lee quite a bit early in my career, the quality of strike. Now he’s 82 years old. It’s not what it used to be, but he finds the middle of the face each and every time. I don’t care how old you are.

“The audio. He still has the audio. And he still has the shape of shots. It doesn’t go as far now. But no one has control of that golf ball, not as well as he has. The old balata ball into the wind, the shots he played, how he did it, hardpan in Texas, and it transferred to pretty much everywhere around the world. People would just sit there and listen. Just listen. You walk on range, and you know the guys who know how to hit a golf ball. Lee was that guy.”

If you want to know why Fred Couples cried at his World Golf Hall of Fame induction, when he mentioned Lee Trevino, the answer is in the preceding paragraph.

If you want to know how many majors Tiger Woods would have won had the game stayed as a persimmon-and-steel-and-balata game, read his quote above.

If you want to know what era Tiger wished he played in, read his quote above.

A guess here is that Tiger will be coming to this event for many years to come, good lord willing and the creek don’t rise. He has a son. Someday he may have golfing grandchildren. Arnold used to play in this event with his grandson, Sam Saunders. Another grandson, Will Wears, played in the pro-am portion this week with Palmer’s longtime business manager, Alastair Johnston.

Trevino’s partner here is his athletic and youngest son, Daniel. Trevino played from the forward tees. He stood slightly shut on most shots, took the club slightly outside, dropped it slightly in and hit low draws all the way around the course. It was magical to watch.

He had no headcover on his driver.

After a long wait, Trevino hung on the side of his cart, to stretch himself out.

There’s so much you’d like to ask him. Like, how often should a man get a haircut? Because Trevino’s hair always looks perfect. He’s short and he’s not trim and he looks like a movie star and a man who has lived a life.

The Trevinos made an eagle on the par-5 last and Trevino stopped and talked to reporters for about three minutes. He was asked about his range session with Charlie, Tiger watching. Here’s what Trevino said:

“See, now that I’ve turned 82, I’m in Vegas every week. It stays in Vegas. We had a great conversation yesterday. It was beautiful. It would make headlines.

“He and I are good buddies. I’ve known him since he was eight years old. Appreciate him, very much. I know what he’s going through. I’ve gone through these back operations and stuff and whatever time limit you give him, he’ll beat it.”

Trevino was done. Trevino was hungry. Trevino is ornery, or he can be. You know, geniuses aren’t easy.