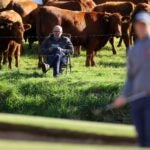 Farmer Billy O'Kane enjoyed the best seat in the house during the Irish Open.

With a U.S. Open hangover on would-be Ryder Cup week, golf didn’t have as newsworthy a week as normal. But just because you didn’t hear about them doesn’t mean there weren’t stories to be told. Here are three you might’ve missed.

Will Zalatoris nabs another top 10

Will Zalatoris was a hot name going into the Corales Puntacana Championship after his T6 finish at the U.S. Open, even becoming the betting favorite entering the week. He didn’t make much noise early in the week, but thanks to a Sunday 65, Zalatoris registered a T8 finish which earns him a spot in this week’s Sanderson Farms Championship.

“The number I had in mind was eight under today,” Zalatoris said. ” I was pretty flat the first couple days. At least I can admit it now, I was a little drained after last week, but fought like crazy and obviously just to give myself a chance.”

As a Korn Ferry Tour member, Zalatoris does not have status on the PGA Tour, so earning another start is key in his quest for a card. If he can continue to play well in his limited opportunities on Tour, he could earn Special Temporary Membership and make the jump to the big leagues faster than anticipated.

A man and his herd

John Catlin won the Irish Open last week, but that was hardly the biggest story on the European Tour. A farmer by the name of Billy O’Kane stole the spotlight on Saturday when cameras picked up on him watching the action from his field adjacent to the course. He was surrounded by a herd of cattle and sipping on a cup of tea, much to the amusement of social media.

“It probably was the only legal seat to watch the championships,” O’Kane told the Belfast Telegraph. “I was well outside the golfers bubble sitting in my own field enjoying the rounds.”

The clip blew up on social media as people expressed their admiration for the quaint setting. While the tournament was closed to spectators, O’Kane still found a way to have the best seat in the house, all without leaving the confines of his property.

“We have land adjacent to the golf course and I was out checking the heifers on Saturday,” he said. “I had some free time and decided to unfold the deckchair and enjoy the view … I probably sat there for around one hour surrounded by the cattle who seemed to enjoy the game as well.”

In the midst of a global pandemic, it’s the little things that can bring a smile to people’s faces.

Jared Wolfe moves to the brink of the PGA Tour

Jared Wolfe has been a professional golfer for 10 years. In that time, he’s never even come close to earning a PGA Tour card — until now.

Wolfe won the Korn Ferry Tour’s Wichita Open on Sunday as he fired a one-over final round to best Taylor Pendrith by a shot. The win is his second of the season and puts him one win shy of earning a coveted battlefield promotion to the PGA Tour.

Wolfe previously had KFT status in 2014 and 2018, though he lost status both times. After earning status back via PGA Tour Latinoamerica last year, he burst onto the KFT scene with a win in his second event of the season in the Bahamas. Now he is tantalizingly close to taking the biggest step of his career.