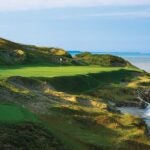 The 7th at Whistling Straits is as gorgeous as lakeside holes get.

Exactly one year from today, the Ryder Cup will finally reach Whistling Straits. It’ll be overdue by a full 12 months, but it will be worth the wait after all. There will be fans — tens of thousands of them — and a restored sense of normalcy with the greatest golf event on the planet. And it’ll all take place at one of the best venues you could host a Ryder Cup.

Whistling Straits has established itself as one of the premier major event hosts in the country over the last 20 years, and the Kohler property has benefitted from the PGA of America bringing three PGA Championships there. But now, it’ll bring the crown jewel.

After visiting Whistling Straits this summer and imagining what a Ryder Cup will look like on the grounds of Sheboygan, Wisconsin, here are eight reasons why 2021 will be particularly great.

As many Ryder Cup captains have done and love to do, Steve Stricker has already changed some aspects of Whistling Straits to favor the Americans for next year’s event. Below are the changes as of August:

3. Rough added around the greens of Nos. 2, 5 and 9, instead of tightly mown areas

Stricker’s goal is obvious with a few of these moves. Open it up a bit more, and let the American brand of ‘Driver Everywhere’ have a little more room. Are these significant changes? Not totally, but it’s definitely a sign of Team USA’s focus when it comes to course setup. After 2018, in which the European team narrowed the fairways at Le Golf National and forced the Americans into playing a throttled-down, precision-focused game, the 2021 setup will likely mirror some aspects of 2016 at Hazeltine. Big ballparks with very graduated rough let the big dogs eat. And we have already seen what that meant at Winged Foot.

We have the potential for a very American moment at Whistling Straits, and one unlike any we’ve seen at RCs of the past. All we need is a little cooperation from the eagle who lives on property.

Yes, there’s a bald eagle who calls Whistling Straits home, and has been living there for years. Its nest is located in some tall pines left of the 10th tee box, but it periodically hangs out atop the trees between the 9th and 18th fairways, perfectly within sight of the 1st tee. So yes, we could see a bald eagle fly over the raucous grandstand at 8 a.m. Or we could see it soar over approach shots on one of the best finishing holes in golf. Or we could see it perch above the 10th tee as a pivotal match makes the turn. Somehow, some way, we need that eagle involved.

Whistling Straits has been generally adored as a major venue in the three times it has hosted the PGA Championship. But each of those instances took place in early to mid-August. By late September, Wisconsin is a much different place, and Whistling is a different course.

Temperature highs in the last week of September can be anywhere from the mid-50s to the mid-70s. The ball could soar, or the course could play brutally long in the cold. Could it snow? Yes, it could! Winds whipping off Lake Michigan will make those lakeside par 3s (Nos. 3, 7, 12, 17) some of the best golf theater we’ll get all year long.

4. The finishing stretch is elite

The routing of a Ryder Cup setup is always tricky. Do you allow the course to play as its normal self, or do your change things up to force the best holes into the first 14 during the event? Most matches will not reach the 18th hole, and many will not reach the 17th. Thankfully, Whistling’s finishing five holes are all uniquely challenging.

The 14th plays short enough to see exclusively wedges on approach shots, with players trying to land it tight.

The 15th is long and often fights the wind the entire way.

The 16th is an uphill par 5 that will be reachable in two with a gigantic green.

The 17th is a long par 3 that is probably impacted by the wind (and looming hazard) more than any other hole on the property.

The 18th is one of the toughest holes in the country. If it plays into the wind, good luck.

5. The course is more flexible than we realize

Whistling is built on a gigantic plot of land. Not everyone is aware, but there’s another 18-hole course on the property that is incredibly underrated. It’s called the Irish Course. The point here is that the property is huge and thus there are tee boxes everywhere, and we really weren’t shown that during the three PGA Championships.

Depending on the wind, a hole like the 6th can play all kinds of ways. According to Mike O’Reilly, director of golf operations at Kohler, with the pin on the left, the 6th green is drivable from the white or green tees. But put the pin back right and extend the tee box to the tips and it might be a 3-wood-9-iron to better control the spin. Reilly also cited 13 and 14 as potentially drivable par 4s, depending on the tee and wind direction. In short, whatever the PGA of America (or, in a lesser-way, Steve Stricker) wants, they’ll be able to craft.

One of the most underrated aspects of every Ryder Cup is the walk to the 1st tee. It’s important. As players make their way from the driving range to the putting green to the 1st tee, anticipation grows and grows and grows. And then Tiger Woods peeks his head out of the tunnel and the coast of Lake Michigan has never been louder.

Folks, this is going to happen.

The walk at Whistling Straits — with its gigantic driving range — is longer than just about any of its Ryder cup competitors. The closer players get to their tee time, the closer their prep brings them to the nerve-bending 1st tee, and the louder it gets. There’s truly nothing like it in golf.

7. The course will be more spectator-friendly

One of the fair knocks on Whistling Straits over the years is that it was a difficult walk for spectators. The dunes that make life so interesting for golfers — both pros and ams — make life hellish for those who just want to watch. O’Reilly confirmed to GOLF.com that various mounding on both nines has been softened and spread out so that walking paths between dunes are wider and the dunes themselves aren’t so drastically hilly where spectator flow is expected. He specifically cited the area between the 3rd and 4th holes, left of 8 and left of 9, where I coincidentally slipped in 2015 walking inside the ropes with Jordan Spieth. Other mounding has been softened on various spots on the back nine as well.

This is important not just for future major championships, O’Reilly said, but in particular for the Ryder Cup, where there are just two dozen golfers (at most) and often just four matches on the course. Spectators move around a Ryder Cup much differently, following particular matches from hole to hole instead of plopping down in one spot and watching all the play shuffle through. “It’s more people traveling together.” O’Reilly said. “It’s like every group is Tiger. You know when Tiger moves around, there’s seven people deep and people rushing to the next hole. That’s how every group is.”

8. When will we see Whistling again?

Generally, a course like Whistling Straits has always had another big event on its docket. When Jason Day dominated at the 2015 PGA Championship, we knew the 2020 (now 2021) RC was on the schedule. But with the PGA Championship’s move to May, it’s likely we will not see Whistling host that event again in the near future.

But could we see the KPMG Women’s PGA head to Wisconsin? There are a number of open host spots in the next decade for that event. Could the USGA swoop in and bring a summer Straits event back with the U.S. Open or a similarly significant championship? We’ll have to wait and see. In the meantime, we’ll enjoy the hell outta this last scheduled ride along Lake Michigan until there’s another to look forward to.