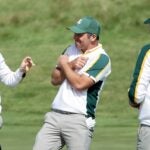 HAVEN, Wis. — When Paul Casey, Lee Westwood, Rory McIlroy and Ian Poulter convened on the 1st tee of the Straits course Wednesday, they prefaced their practice round at this 43rd Ryder Cup with all the casualness of a Saturday-morning match at the club: by tossing balls in the air to determine their playing partners.

“I think we’ve confused a few people on the first tee,” Casey said of the fans peering down from the arena-style grandstand. “Nobody knows what’s going on on the outside, which is part of the fun that we have.”

When the balls came to rest, it was determined that Westwood and Casey would square off against McIlroy and Poulter.

Randomly selecting playing partners in a practice round might not sound like a big deal, but it is noteworthy at a Ryder Cup, where seemingly every last decision is weighed by a team of captains, statistical whizzes and assorted other experts, advisors and focus groups. That the Europeans were willing to let fate decide their practice-round teammates tells you something about their comfort level with one another and the less rigid approach they take to this week compared to their American counterparts.

That’s not to say the Europeans don’t lean heavily on analytics, because they do, but as Casey said, “It’s like why overthink it on a Tuesday, Wednesday or Thursday?”

Why, indeed — leave the overthinking for Friday, Saturday and Sunday!

Conditions were blustery Wednesday, with gusts of up to 20 mph blowing off Lake Michigan, so the Europeans decided to play alternate-shot. “I struggled in the wind a little bit, and so foursomes was just the thing to do,” Casey said. “Plus, just being a long day, it sped things up a little bit.”

Casey didn’t say who won the match but it didn’t lack for fireworks. “We explored the property greatly,” Casey said. “Lots of birdies. Poulter and Rory throwing in eagles, as well. Just trying stuff out.”

Poulter — shocker — was the star, playing the front side in three under.

Casey stressed that his group’s intent with the first-tee ball-tossing was not to protect any state secrets. Quite the opposite.

“It’s not trying to throw smokescreens or throw a dummy or a fake-out there. Not at all,” he said. “I know my pairings, possible pairings. It’s up to Paddy to what he decides to do. [The pairings] are not in the envelope or however it works yet, but I’ll still be throwing a ball up on the first tee later today.”

He won’t be the only one.

“I still don’t know,” Jon Rahm, the Spaniard, told the media Thursday when asked who he’ll be playing with when the matches start in earnest. “You tell me. I think you guys think we know a lot more than you guys know. I have an idea of what players I might be playing with. Didn’t you guys see us throwing balls on the tee yesterday? Well, there you go. That’s how we do things, leave it up to chance.”

The formula has been working.