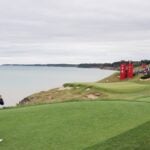 Justin Thomas and Jordan Spieth will play together this week.

But as Team USA assembled for its next set of practice rounds on Wednesday at Whistling Straits, the tea leaves — or tee sheets — began to make more and more sense.

There won’t just be six pairings; substitutions, formats and hot hands mean there will be several different iterations throughout the week. But let’s break down the most likely duos we’ll see this week on the American side:

Remember that 2018 Ryder Cup, when the U.S. team fell into a 10-6 hole? Well, three of those six points came courtesy of Spieth/Thomas, who went 3-1 in four sessions. Each guy played all five matches and they’ll each play at least four this time around.

Despite a little practice round misdirection on Tuesday — Thomas and Bryson DeChambeau skipped a few holes on the back nine to finish in a twosome, while Texas Longhorns Spieth and Scottie Scheffler played on as the final pairing of the day — it seems like a wise move to keep this duo together.

They’re both Ryder Cup rookies. A month ago, neither had qualified for this team. But Cantlay and Schauffele might be the strongest team at Whistling Straits.

Neither is much of a “rookie,” after all. Schauffele is 27 and just won Olympic gold. Cantlay is 29 and just won the FedEx Cup. At the most recent team competition, the 2019 Presidents Cup, these two played together in all four team sessions and each won his singles match to finish the week 3-2.

They’ll be a team again this week; their media availability is back to back, they played together Tuesday and Wednesday and all signs point toward them playing three or four sessions together again.

While these two have never paired up together — Morikawa hasn’t played on a U.S. Team, after all — they teamed up Tuesday and Wednesday and had back-to-back press conferences on Wednesday morning, too.

On paper, it seems like an interesting call to put Team USA’s two highest-ranked players together. But both Morikawa and Johnson enter this week in confusing form. Johnson has four top-10s mixed with two missed cuts in his last six starts and remains the second-ranked golfer in the world. Morikawa won the Open and finished T4 at the Olympics but tweaked his back and tweaked his swing and barely beat anybody in his last three starts.

At the 2018 Ryder Cup, Johnson played with Rickie Fowler and Brooks Koepka, going 1-3 in those matches. At the 2019 Presidents Cup, he played with Gary Woodland and Matt Kuchar, going 1-2 in those. He’ll have a new partner this time around.

The first three pairings seem like locks, but the rest of these feel like they’ll at least happen at some point throughout the week. Florida St. teammates and South Florida residents Berger and Koepka, who won in back-to-back weeks earlier this year, seem primed for a pairing after teeing it up together Tuesday and Wednesday and practicing some alternate shot.

English seems like a steady presence to team up with DeChambeau, their games mesh together and the two teed it up together Wednesday alongside Morikawa and Johnson. Entering the week, the matter of who would pair best with DeChambeau was among the Cup’s most vexing questions. English will likely be part of that answer.

If this feels like the least solidified pairing of the bunch, well, there’s a reason we’re at the bottom of the list. Finau and Scheffler would make for a dynamic pairing with plenty of firepower, and they went off in the same group on Wednesday alongside Berger and Koepka. But it’s also easy to imagine Finau pairing with Koepka (as they did in 2018) or DeChambeau (as they did in 2019) and Scheffler could mesh well with just about anybody, including DeChambeau (with whom he played on Tuesday).

First session pairings will be announced Thursday. Until then, the speculation continues!