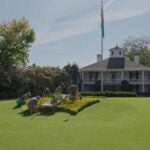 'The One in November' debuts on Tuesday night on ESPN with an inside look at the November Masters.

Buckle-up golf fans, it’s time to witness the Masters like never before.

The One in November, a new ESPN documentary set to release Tuesday night (March 16) in conjunction with Augusta National and Boardwalk Pictures, has the makings of must-see TV for fans of Georgia’s most prized golf acreage. With never-before-seen footage from on the grounds at Augusta National in the days leading up to last November’s Masters, the film promises an unheralded look into an unheralded year — the first in history without patrons in attendance.

The film surrounds the days leading up to the first-ever November Masters and follows the frenzied organization among Augusta National staff to orchestrate an event through a host of logistical loopholes.

Viewers will hear interviews from a host of firsthand witnesses, including Tiger Woods, Augusta National chairman Fred Ridley and ESPN host Scott Van Pelt. They will see far more, including rare footage of Jack Nicklaus and Gary Player’s pre-dawn warm-up and from inside the Augusta National clubhouse for Woods’ fifth Champions Dinner.

The club is listed as one of the film’s co-creators with Boardwalk Pictures, a production house best known for its award-winning Netflix shows Last Chance U and Chef’s Table. Fans of those shows can expect The One in November to carry a similar cinematic style to Boardwalk’s better-known outfits. But such access comes with a price: the film was produced largely in secret and, as of the morning of its first airing, has not wielded the full weight of ESPN’s promotional vehicle.

On Monday, ESPN dropped its first of two mysterious trailers previewing the film, which shows members of ANGC’s horticultural team busy at work on Magnolia Lane.

The documentary airs at 7 p.m. ET on Tuesday on ESPN for the first time and will have a series of screenings across the ESPN family of networks (ABC, ESPN and ESPN2) leading up to this year’s tournament. On April 4, the program will become available for streaming on ESPN+ and on Masters.com.