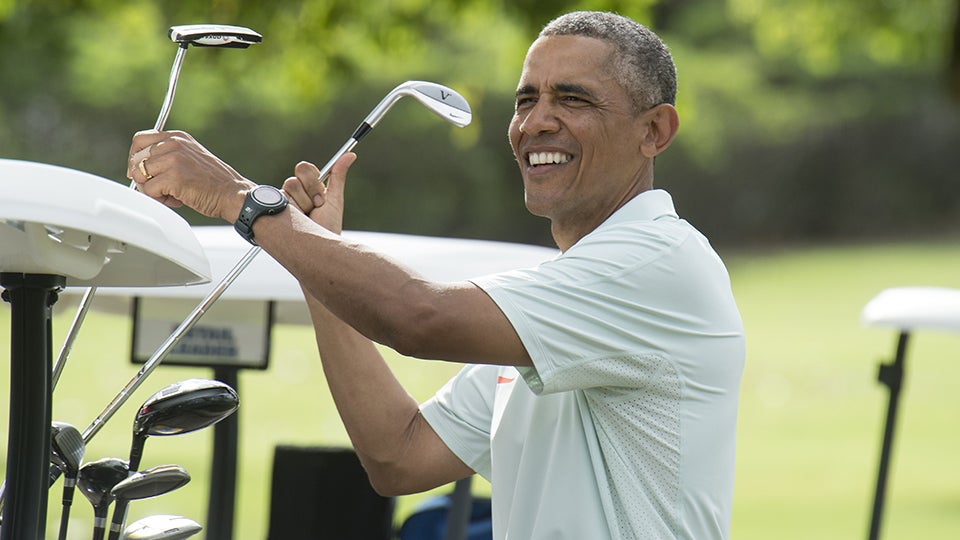 Donald Trump will be officially sworn in as the 45th President of the United States on Friday, signaling the end of Barack Obama’s eight-year reign.

The U.S. has a history of golf-loving presidents, but Obama, who has reportedly played more than 300 rounds during his presidency, might top that list.

He’s played rounds with celebrities and high-profile figures, forced at least one wedding to relocate and crashed another, and even orchestrated Oval Office putting contests versus world-famous comedians. Here are the 11 most memorable golf moments from Obama’s past eight years — ranked.

11. The time he was snubbed at Winged Foot AND Trump National.

Just because you’re the president of the free world doesn’t mean you can waltz onto a golf course and grab any tee time. According to an NBC 4 New York report, in 2014 Obama was unable to land a Labor Day weekend tee time at several exclusive clubs. The report named Winged Foot, Trump National and Willow Ridge Country Club among the courses unable to accommodate the president, lest they derail their members’ plans on one of the busiest golf weekends of the year.

10. The time he said his score was “classified.”

Obama spent a February afternoon in 2016 at the TPC Stadium Course PGA West in La Quinta, and a few days later he declined to tell the media how he fared. “It’s a very nice course; very difficult,” he said. “My score is classified.”

9. The time he finally gave in and told the world his handicap.

One of the government’s greatest secrets was revealed in August 2016, when Obama sat down with NBC’s David Feherty for a lengthy chat and finally revealed his handicap on the links. “An honest 13,” he said.

8. The time he lost a $5 putting bet to Bill Murray in the Oval Office.

The legendary comedian and pro-am regular, Bill Murray, took a few bucks off one of the most important men in the world during an oval-office putting contest. Obama retold the story on Jimmy Kimmel Live in October and said Murray couldn’t miss. “The glass was rigged,” Obama said.

7. The time he got a lesson from Butch Harmon.

Maybe he was sick of getting so many strokes from his playing partners? Enter, Butch.

6. The time(s) he played golf with Tiger.

The two have teed it up at least twice. Once, according to The Washington Times, it was quite expensive.

5. The time Michael Jordan called him a hack; but Obama didn’t care.

Golf fanatic and NBA great Michael Jordan was asked during an October 2014 interview with the Back9Network who his dream foursome would be. He then took a jab at Obama, saying he’s never played with the president, but would “take him out” on the links. “He’s a hack and I’d be all day playing with him,” Jordan said. “… I never said he wasn’t a great politician, I’m just saying he’s a s—– golfer.” Obama, who according to reports was about a 17 handicap at the time, told WJMR in Wisconsin that Jordan might have just been trying to give the station a ratings boost, adding that “there is no doubt that Michael is a better golfer than I am.” He was able to poke back at Jordan, though, saying, “He might want to spend more time thinking about the Bobcats — or the Hornets,” he said.

4. The time his round forced a couple to move their wedding.

In December 2014, two Army captains were told their wedding would have to be moved from the 16th green at Kaneohe Klipper Golf Course in Hawaii — Obama, on vacation, planned to play golf with a couple of friends that day. He later called the couple to apologize and congratulate them.

3. The time he and John Boehner tried to mend fences on the golf course.

President Obama and former speaker John Boehner (R-Ohio) slowly bonded over the years, mostly on the golf course. They even teamed up for a well-publicized match against Vice President Joe Biden and Ohio Gov. John Kasich at Andrews Air Force Base in 2011. But apparently those presidential rounds weren’t always loose. In 2015, Boehner told Golf Channel that he couldn’t play with Obama anymore because “everybody gets bent out of shape, worried about what we’re up to when all we are really going to do is just play golf.” But Boehner eventually went out on a high note. When he retired in October 2015, his fellow lawmakers gave him a golf bag, new clubs and a golf cart with a personalized license plate.

2. The time he had this epic chip-in.

1. The time he crashed a wedding at Torrey Pines.

Sunday, October 11, 2015, was a special day for Brian and Stephanie Tobe, as they prepared for their afternoon wedding at Torrey Pines. But it didn’t go exactly as planned. They were scheduled to say their vows overlooking the 18th green, but were delayed because the president was playing through. The couple, however, didn’t mind. They shook hands with the president and he apologized for the inconvenience. The wedding photographer got some outstanding photos, too, which you can see here.