Dustin Johnson’s imaginative bunker shot ‘is something else’ 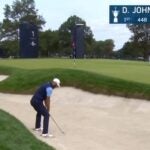 Dustin Johnson stares down a tricky bunker shot on Friday at the U.S. Open.

Dustin Johnson’s ball was about 39 feet away from the hole.

Johnson hit his second shot on the 448-yard, par-4 1st hole, after a drive in the right rough, into the bunker to the left of the green. His ball was under the hole and about 13 yards away. The slopes and speed of the green would not hold a direct shot, but it would help an indirect one.

“He’s tucked it into that bunker, and he’s going to have to use some of the slopes behind the flag to try to get it close,” analyst Justin Leonard said Friday on Golf Channel’s broadcast of the second round of the U.S. Open.

“He’s decided the way for him to get it closest to the hole is to play all the way to the back of the green and use this ridge,” analyst Trevor Immelman said on the broadcast. “This is risky. Let’s see.”

“Come on! Come on,” someone in the background yelled.

The ball finished just below the hole and about 7 feet away.

“That is sweet,” play-by-play announcer Mike Tirico said on the broadcast. “Well done.”

“That is something else,” analyst Paul Azinger said.

Johnson, who has won two tournaments in his past four starts, finished with an even-par 70, and he is at three over overall for the tournament.

“I think still on this golf course, with the conditions that we’re supposed to have the next couple days, I don’t feel like I’m out of it,” Johnson said after his round. “I’m going to have to play really well, but I like where I’m at. I think obviously two solid rounds and right back in the mix.”