Dustin Johnson on his game: ‘I always think I’m dialed in’ 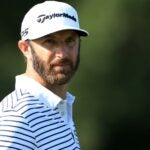 Dustin Johnson is looking for the first FedEx Cup title of his career.

Dustin Johnson had a three-round stretch in mid-July when he posted 80-80-78. This might be a good trio of scores for a six-handicap, but for the No. 1 golfer in the world, that just doesn’t cut it.

Since then, Johnson has been a machine. He’s played 19 rounds, and broken par in all but one. His scoring average during the run is 66.95 and he has a win and two runner-up finishes, which have him well on his way to his first FedEx Cup title.

Simply put, he’s been dialed in as of late. But it turns out that Johnson feels this way often — in his mind at least.

“I always think I’m dialed in,” Johnson said at the Tour Championship.

But sometimes he isn’t dialed in. It’s a simple fact of golf — you can’t be on all the time. Back-to-back 80s two months ago show as much.

Talk about elite confidence. But that can be what separates the good players from the greats. The ability to brush off the bad like it never happened and move on is not a skill that’s easily learned. Johnson is among the game’s best in that department.

So how did Johnson go from looking like a weekend hacker to going on this absurd run? What was different then than what he’s doing now? Turns out it’s a mystery — even for him.