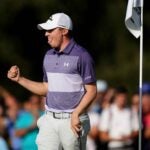 Matthew Fitzpatrick was bogey-free in the final round of the Estrella Damm Andalucia Masters in Spain, where he claimed his seventh career European Tour victory at historic Valderrama by three shots over Min Woo Lee and Sebastian Soderburg.

“Very patient all day,” Fitzpatrick said after his round. “Didn’t try to press anything. Stuck to our targets and managed to hole the putts in the end.”

Fitzpatrick, 27, carded 15 pars to start his round before nabbing birdies on Nos. 16 and 17 en route to a score of two-under 69, bringing him to six under par overall.

It was the first event for Fitzpatrick since Team Europe was defeated by the Americans in the 2021 Ryder Cup at Whistling Straits in September. Fitzpatrick, a former U.S. Amateur champion, played on the team, but was one of three Europeans to fail to win any points in their matches (Paul Casey and Bernd Weisberger were the other two.)

It’s the second time Fitzpatrick has been skunked at the Ryder Cup — he was 0-2-0 when Team USA claimed the Cup at Hazeltine in 2016.

With his victory, Fitzpatrick moves to fifth on the Race to Dubai ranking — the European Tour’s season-long competition to crown the tour’s No. 1 player. Fitzpatrick trails Collin Morikawa, Billy Horschel, Jon Rahm and Tyrrell Hatton.

The Race culminates with November’s DP Tour World Championship in Dubai, which offers a $9 million purse.