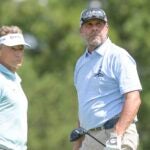 Doug Barron tees off in front of Bernard Langer on the Champions Tour.

The best tournament in golf this week is the one on the Champions Tour. Here are some of the sparkly names on the virtual tee sheet: Doug Barron, Fred Couples, John Daly, Ernie Els, Davis Love, Colin Montgomerie, Vijay Singh, Doug Barron. OK, yes, we listed Doug Barron twice. Doug Barron, mainstream touring pro after a long trek through the desert, deserves it.

And the venue — the venue! The event, known as Constellation Furyk & Friends, is being played at the Timuquana Country Club, where there’s a splendid Donald Ross course, gentle and spare and flat, in the city limits of Jacksonville. Touring pros don’t play courses like Timuquana every week, not even close. The fellas — Doug Barron among them — have been raving about it.

The club is about 45 minutes by car from the PGA Tour headquarters in Ponte Vedra Beach. Furyk, who has lived in greater Jacksonville for years, is the host of the event. He’s a company many, Tour-style, through and through. Some of the players in the field — Singh, Daly, Mickelson, Barron — have had significant run-ins with Tour’s officialdom over the years. Furyk, most decidedly, has not.

You maybe remember that Singh sued the Tour and settled out of court. Daly has had a handful of Tour suspensions. Mickelson’s been jawing at the Tour brass for years — it’s almost a hobby for him. And Barron — Doug Barron, who once finished third in Houston — was the first player suspended by the PGA Tour for violating its drug policies.

That was in 2009, when Tim Finchem was the Tour commissioner. Barron, who had a long history of medical issues and was barely playing the PGA Tour at the time, was suspended for a year. He sued the Tour.

That was then. That was 12 long years ago.

“If I saw Tim Finchem now, I’d buy him a beer,” Barron said in a phone interview this week, after playing in a pro-am for the F&F.

Barron and his wife, Leslie Barron, a gifted artist (Marc Chagall meets Grandma Moses), were staying in one of the downtown Jacksonville hotels, but they were thinking of moving to one in Ponte Vedra Beach. They weren’t worried, about having any sort of flashbacks. They’ve moved on.

Barron is a Champions Tour workhorse. If there’s an event, he’s there. He’s has played 32 times in the current 20-’21 season. (Bernhard Langer has played 34 times and Couples 18.) He’s made $1.5 million for the season after winning an event in Canada in August, his second senior win. He won the Dick’s Sporting Goods event, in Endicott, N.Y., in 2019, shortly after turning 50 and a decade after his suspension was announced.

So two wins in a two-year span on the senior tour, after barely playing for a decade and after a long, frustrating PGA Tour career in which he played 238 events and made 111 cuts. (Do you know how good you have to be at golf to make 111 Tour cuts?) When the Tour suspended Barron for violating its anti-doping policies, some of his Tour brethren thought it was a joke and not a good one. Barron was a journeyman’s journeyman, 40 years old, with a health history and virtually no PGA Tour status. He was on the shelf for a year and stayed there, long after the suspension was over. For about eight years, Barron played virtually no competitive golf.

So for Doug Barron, to be where he is now, given where he was? It’s astounding. Yep, Doug Barron. He beat Couples, when he won in 2019. He’s ahead of him on the money list now.

“It was a good eight years, when I was home,” Barron said. “I enjoyed being home. Enjoyed being with my wife, our two kids. I gave a thousand lessons.” Competitive golf was in his rearview mirror. Or so he thought.

When he got into his late 40s, Barron found that he had simplified the game, physically and mentally. “The Tour game is a lot of cut shots, but my swing wants to hit draw shots, so I just decided to play the draw,” Barron said. (When he won in Canada this year, he hit a perfect, drawing, 200-yard 5-iron, 10 feet from a back-left pin. A birdie. Had the pin been in the back right, would he have won the event? You can’t say. Sometimes you need a little luck, in life and tournament golf, too.) He started meditating, eating better, exercising more. He started playing in events on the minor-league Emerald Coast Tour and won in it. In the summer of 2019, about to turn 50, he went to England to attempt to qualify for the British Senior Open. Talk about taking a flyer. He went alone.

“I actually thought it was a little extravagant,” Leslie Barron said this week. That, and more. His years on Tour — always on and off, off and on — were stressful for Barron, and for the Barrons. “I was happy for him not to be doing it,” Leslie said. Their family life had improved, with the father of the house, and the father of two boys, at home.

But he qualified for that British Open, and then, out of nowhere, he finished fifth, at Royal Lytham. When Doug Barron came home, he was 50 and confident and found himself loving tournament golf for the first time in forever. His next event was Dick’s, in upstate New York, where he won. He’s been one of the fellas ever since. One of the fellas whose story is like nobody else’s.

He plays practice rounds with Chris DiMarco and Ken Duke and others he knew from 20 and 30 years ago. Leslie Barron comes out now and again, and she has rekindled friendships with other player wives that she’d maintained only by Facebook the past dozen or so years. The Barrons’ older son, Buzz, 20, is in the U.S. Army and is stationed overseas. The parents can speak to him once a week. Their younger son, Wiley, 15, is an active tournament tennis player. Leslie Barron is behind in her commissions. All the Barrons have a thing.

“I find I don’t have to practice as much now,” Doug Barron said. “I know my swing.” He knows what he wants to do with the ball and how he’s going to do it. As the whole suspension nightmare? He says he barely thinks about it. But that doesn’t mean the experience didn’t mark him.

“He was pretty soured [on tournament golf], for sure,” Leslie said. “The suspension was the beginning of the end. He needed to be well, and he wasn’t. It was a very, very difficult thing to go to through. But I don’t think we’d be here if we didn’t. We got through it. He got better.”

The better-at-golf part anybody can see. There he is, Doug Barron, 14th on the Champions tour money list for the season. Leslie Barron didn’t spell all this out and she didn’t need to. Her husband got better, in myriad ways. There’s no magic pill for that. It doesn’t happen overnight. But here he is, playing in Jacksonville. Doug Barron, alongside Furyk and his friends. Doug Barron.