Don’t get mad at Vijay Singh — not for this 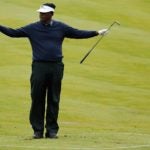 If you're getting mad at Vijay Singh, you're missing the point.

They’d taken a break, though. In recent years Singh has been recast as the range-grinding, soft-spoken mystery figure hitting tires with sledgehammers and occasionally reappearing during tournaments. The Big Fijian most recently stole the show at the 2019 Honda Classic, where he played his way into the final group at age 56. Nobody was mad at Vijay Singh then.

But now people are mad at Singh again. This time it’s because Singh has signed up to play in the first Korn Ferry Tour event when the tour resumes play in June. The optics of a man with $71 million in career Tour winnings taking a spot — or a paycheck — from a bunch of golf’s hungry minor-leaguers coming off a three-months layoff is admittedly not great. But I’d urge you to resist the knee-jerk reaction. Don’t get mad at Vijay Singh. He’s a professional golfer playing the highest-level tournament for which he is qualified, looking to sharpen his game and compete at a course he knows well. Simply put, his buy-in should be good in this — or any — card room. He’s earned that.

These words are too late for Brady Schnell, a 35-year-old Korn Ferry member who took to Twitter Thursday to call Singh a “true piece of trash” and a “complete turd” in tweets that have since disappeared (and Schnell’s account is now private).

I’m not sure my words would have had much effect in any case; Schnell seemed rather set on his views here. But he was hardly the only one — and if you believe him, plenty of his peers felt the same way. Vocal golf fans took to the Twitter streets, many of them upset on behalf of the Korn Ferry pros (some others, to be fair, stuck up for Singh).

If you’re wondering how Singh is in the field to begin with, the PGA Tour resumes that same week at the Charles Schwab Challenge, but Singh’s lifetime Tour status won’t get him into the field at Colonial. As an alternative, Tour rules allow fully exempt Tour players to compete in Korn Ferry events when they’re not qualified for that week’s PGA Tour event. Enter Singh, playing a home game at TPC Sawgrass.

Let’s review, briefly, some of the reasons you may be predisposed to rule against Singh. We can begin in 1982, when 19-year-old Vijay left Fiji to play the Australian mini-tours and was eventually banned for making long-distance phone calls back home and sticking tournament organizers with the bill. Not cool. At the 1985 Indonesian Open, Singh was accused of stroke-shaving, which led to his expulsion from the tour (he has always maintained his innocence) and a subsequent two years’ exile as a club pro in the rainforests of Borneo.

Fast-forward to 2000, when he won the Masters and reportedly told everyone to “kiss my ass” on his way off property. Or to 2003, when he was less than enthusiastic about Annika Sorenstam’s appearance on the PGA Tour and said he hoped she’d miss the cut, if she wasn’t going to properly qualify. There was the incident in 2007, when Singh won at Bay Hill and made a point of parking in spots assigned to the media throughout the week, just because he could. There was the deer antler spray incident in 2013, too, which led to Singh’s suspension (later dropped) and Singh’s lawsuit (later settled).

In between there were less tangible accusations of Singh generally being a loner and a jerk. There’s also no discounting his role as foil to the more-popular Tiger Woods in the mid-2000s. Even then, he kept the media at arm’s length, smarting from the firestorm that followed his Sorenstam comments. While stories occasionally emerged of Singh’s good humor or the ways he supported younger players — with both time and money — he didn’t do much to endear himself to the public. If you’ve entered this week with a less-than-favorable feeling about Singh, well, that’s understandable and I’m not here to argue with you.

But let’s tick through the reasons you shouldn’t get mad at Singh about this incident in particular. He’s following the Tour’s rules and playing through a category reserved for PGA Tour pros. He’s playing the best tournament he can. He’s sure to try his hardest; he always has. More to the point, Singh has earned this. He’s not some middling, well-connected pro on a sponsor’s exemption. He’s one of the greatest golfers of the modern era. We should be praising his work ethic, admiring his competitive fire, lauding how far he’s made it from hopping fences to caddie, $1/day, at Nadi Airport Golf Club. We should sit back in awe that he could still summon the desire to take on golf’s rising stars. If he were more broadly beloved, we would. If this were Fred Couples the only thing we’d be figuring out is the live-streaming schedule.

Finally, while people remember Singh’s solo 6th at the Honda last season, it’s not like this is Justin Thomas coming to buzzsaw the field and take the kids’ lunch money. Excluding the Honda, here are Singh’s eight starts on the PGA Tour since the beginning of last season: MC-MC-MC-MC-MC-MC-MC-MC. He’s 57 years old. He’s No. 849 in the world (Schnell is just behind him at No. 913).

Don’t like that Singh’s there? Shoot a lower score than he does.