#AskAlan mailbag: Why so little love for Vijay Singh?

In this week’s mailbag, GOLF senior writer Alan Shipnuck answers your questions about the finish of the Honda Classic, Vijay Singh’s impressive week and more.

How disappointed were you when that putt went in? -@IanMDallas

Only slightly. I love the swagger of this Kevin, er, Keith Mitchell character. And there are few things in sports more thrilling than watching a player – any player – gut a do-or-die putt on the 72nd hole. I was happy to see Mitchell make his.

With Koepka and Fowler waiting in the wings for a playoff (and Jack Nicklaus staring down from the booth), was that the nerviest putt ever for a first-time winner? #AskAlan -@LudaChris1134

Well, jeez, when you put it like that! But, Nicklaus himself made the 1962 U.S. Open his first victory, in a playoff over Arnie Palmer at Oakmont no less, so we gotta assume there were some nervy putts along the way. Regardless, all hail Mitchell, at least until a latter-day Adam Long comes along and does something equally spectacular.

What does it say about the future of women’s golf that all these Instagram “pro” golfers who can’t break 80 have better endorsement deals and are more recognizable than LPGA winners? -@BobRoge321

As you may know, I’ve always been a Twitter guy, but recently I’ve tried to become more active on Instagram. The algorithms know all, and it was suggested that I follow a few young women holding golf clubs. Once I did, I was inundated with suggestions to follow many more, which I did. So I’ve belatedly fallen down the rabbit hole of the Insta “influencers” (to use my least-favorite term in the language). It’s remarkable how many attractive young women appear to be making a living by going to the gym, hitting balls at the range, taking provocative selfies, playing in pro-ams and eating fancy dinners with friends without ever playing real tournament golf. I guess it’s good work if you can get it! Personally, I’m way more interested in the doings of LPGA players, but it appears I’m in the minority.

Why so little love for Vijay? His contemporaries (Love and Couples, especially) get so much more attention/adulation. Vijay basically had both their careers put together, plus he got a late start. And then there’s 2004 – Tiger never won more in one season. Is he that prickly? -@CHFounder

Vijay is actually a sneaky-good interview, on the rare occasions when you can catch him in the right mood. His high-pitched giggle is one of the low-key pleasures of the golf beat. Alas, his entire career has been marked by a complicated/confrontational relationship with the press, stemming from the murky cheating incident that preceded him to the PGA Tour. (The final word on this subject will always be the John Garrity classic for which he traveled to Fiji.) Let’s face it, Vijay never exuded any warmth or charisma between the ropes. Since he wouldn’t let reporters get to know him and tell his story, it was hard for fans to have a stake in his success, or for companies to want to invest in him the kind of ad campaigns that can shift public opinion. Vijay is one of the biggest badasses to play golf. His run in the early aughts was epic. He may have earned our respect, but it’s largely his fault he has never gotten the love.

What are your thoughts on the new(?) outspoken Brooks, publicly taking on hot-button issues and speaking his mind? -@RickyLegumes

What’s not to love? I agree with pretty much everything Brooks has said during this scorched-earth media tour. So many of golf’s young stars are bland and sanitized, it’s awesome that he’s keeping it real. Along the way we’re all discovering that there is much more to Koepka than just bulging biceps.

How big would a regular PGA Tour victory really have been for Brooks? How soon before he gets it #AskAlan -@jhen

Not that big. It remains one of golf’s most curious stats that Koepka, nearly 29, has won more majors than everyday Tour events. You have to think that over the next decade he’ll win a bunch more tournaments; no worries that this Honda Classic wasn’t one of them.

What on earth would happen if the USGA/R&A actually ever seriously regulated distance? If this is the response to “oh my god we have to bend over to our knees to make a drop”? -@ShoshEAK

Yeah, I can’t wait to see what pantomime Fowler comes up with when the equipment gets rolled back and he’s suddenly hitting it 40 yards shorter! But the current sniping between the USGA and various Tour players is about much more than just this latest set of rules changes – the simmering resentment has been building for years based on a series of things: the new groove rules, which had minimal effect on everyday players but was a huge inconvenience to Tour players; the destroyed greens at Chambers Bay; the anchoring ban, which affected the livelihood of numerous Tour pros; the epic screw-up with DJ at Oakmont; the Saturday setup at Shinnecock; this recent bizarre non-apology for publicly disparaging Justin Thomas; and sundry other cock-ups and controversies. The USGA has destroyed its credibility with Tour players, a massively entitled bunch that feels uncharacteristically powerless in the face of this bungling bureaucracy. So they are doing the modern equivalent of rioting in the streets: complaining on Twitter. As irritating as all of the whining has been, the cumulative effect is impossible to ignore. The USGA is now facing a reckoning. The leadership has always enjoyed ruling from their ivory tower, well above the fray. But if the USGA doesn’t make serious changes to incorporate PGA Tour players into its rule-making it risks losing them forever. To the original question, the USGA needs to retain its authority over the Tour because, except for a few epic point-missers and those on the payroll of various equipment companies, we all recognize that modern equipment (and other factors) have rendered obsolete the game’s grand old playing fields. The USGA has spent the last quarter-century abdicating its responsibility to regulate equipment. At some point that has to change. By then, the relationship with the Tour better have improved dramatically or anarchy will ensue.

Will the Tour or any network ever listen to complaints about the TV coverage? #AskAlan -Ben (@BKBryant23)

Oh, they’re listening. I recently heard the chilling tale of top execs at CBS haranguing Tour brass about the social media comments of certain media members, which led to them being called onto the carpet. The lesson is that the TV folks, and their enablers at the Tour, would rather shoot the messenger than thoughtfully absorb the critiques and make changes. There is an old-guard that runs all of the golf telecasts, and they have very different sensibilities than the modern golf fans. I’m afraid it is going to take a generational change in leadership for any real improvements to be made. 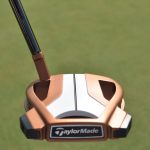 You may also like PHOTOS: What’s in the bag at the Arnold Palmer Invitational

How about three old guys in the top 20 at Honda? Vijay, Furyk, Ernie. And with Phil being successful … are we going to see a 50-year-old win on Tour soon? -@FrazerRice

Vijay’s run was great fun but I can’t believe he gave up the ghost on the 71st hole when he hit a truly awful shot with a short-iron in his hands and his ball on a tee. To quote Johnny: That’s pressure. Clearly Phil has the best chance to snag a win in his 50s. He’s won two big-time events in the last year and is only 15 months from the big 5-0. In fact, he might be our last hope. The modern golf swing is hard on the body, and Tour players are now peaking earlier and likely to burn-out sooner. Oh by the way, Phil’s 50th birthday comes during U.S. Open week at Winged Foot.

Who will finish their career with more majors, Dustin Johnson or Justin Thomas? -@ZachZola1

Given that they both currently have one, and that DJ is nearly nine years older, it’s pretty hard not to pick JT. At the same time, I wouldn’t be shocked if Dustin went on a rampage and won three majors in the next two years, or that kinda thing. This would change the calculus dramatically. In summary: I’ll take Thomas, until I don’t.

If I’m a scratch golfer, can hit the ball 275, and shoot in the mid 70s in tournament pressure, how far back in time do I need to go to be competitive with the world’s best? Let’s assume I get to play with my equipment. #AskAlan -Jonathan (@jfkruse)

So you get to use titanium drivers and nuclear balls and your competition is stuck with hickory and gutta percha? Okay, we’ll go with it. You’re heading to the 1920s, when the winning score at the U.S. Open was mostly in the 290s, and hit 301 in ’27. Beginning the following decade the winning score trended to the mid- to low-280s, which is out of your league, Sport.

It’s not that juicy, but the 1994 Honda Classic was the first tournament I ever covered as an intern at SI. I was sent there to serve as an errand boy to the great Jaime Diaz. He was working on a story about building “the perfect golfer” – that is, talking to a bunch of players to gain a consensus on who was the best driver, long-iron player, putter, etc. He asked me to help with some of the interviews. I went into the locker room on Sunday afternoon and Nick Price was there packing up. World number one Nick Price. I introduced myself and told him what I was doing and he said, Sure, kid, take a seat. And for the next half hour he waxed poetic on dozens of players. I’ve never forgotten how kind and generous with his time he was. Price nominated Seve as the best wedge player – still! – and told a long story about an impossible shot he once witnessed from the great man. Price punctuated the tale by shouting, “He hit it to d— length, mate. D— length!”

It seems an appropriate time to ask: what is the biggest problem in professional golf today? -Clay @TheMrLandon

At the moment, I’m gonna have to say the USGA’s Twitter feed.