Did a Keegan Bradley disagreement with his caddie cost him? 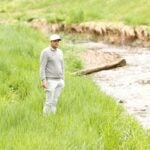 Keegan Bradley looks for his ball on Sunday in the penalty area on the 11th hole at TPC Potomac.

They agreed on the approach.

“I just don’t think there’s any — you don’t get anything to laying up,” Scott Vail said to his player.

“No, it’s a hard shot,” Keegan Bradley said to his caddie.

They agreed on the club.

They then disagreed. And Bradley’s dissent, at least according to two former players-turned analysts, figured heavily into determining a Wells Fargo Championship winner. Bradley and Max Homa started the par-4 11th at TPC Potomac with Homa up a shot. They walked to the 12th with Homa up three, and he eventually won by two.

On the shot in question, both Bradley and Homa were in trouble. Each had over 200 yards to the flag on their second shots, with a penalty area short of the green. Each had a waterlogged lie below them. On Bradley’s ball, the player and caddie conversation, picked up by CBS microphones, eventually turned to the target. Vail wanted Bradley to play left of the trouble, toward a greenside bunker.

“I mean, plus at that bunker, like the right edge of it,” Vail said.

“Yeah, I’m just going to go a little to the right of it,” Bradley said.

“The spot that he was in on 11 was a terrible lie. … Not great footing. You could hear it squishing around right there,” analyst and former player Brandel Chamblee said on Golf Channel’s Golf Central show. “Way left of that green is fine. The worse you’re going to make is bogey. To hear him say to his caddie, who had sort of implored him to miss it in that bunker, I’m going to go a little right of that, you could hear it, you could hear it in the voice. He’s like, oh, OK.

“Like, to me, that’s caddie-speak for — it almost sounded like Jon Rahm’s caddie a few years ago trying to talk him out of that crazy shot at the Players Championship, when he was trying to snap it around the tree. It almost sounded like that. Well, in each case, the caddies proved to be correct. Certainly was in Jon Rahm’s case. Certainly was in this case.”

By now, you can probably guess what happened, but we’ll say it anyway: Bradley went right of his right, and into the penalty area. From there, he took a drop, pitched on and two-putted for a double-bogey six.

“That’s a bad shot there,” Ian Baker-Finch said on the CBS broadcast.

“Well, his caddie said left, and he said I’ll go a bit more right,” analyst Nick Faldo said. “And that wasn’t the time. That was brutally difficult.”

Homa hit next. And hit almost exactly toward Vail’s line, the ball landing in the bunker. From there, Homa got up and down for a four.

“From 217 yards, you could almost hear the anxiety, or maybe even the disappointment from Keegan’s caddie’s voice when he said, OK, I wouldn’t go right of it,” Chamblee said on Golf Central. “He was trying to sort of push him into a real conservative play over the left side of that green there and let him do his work. And instead he found the penalty area and gave Max Homa an opening.

“Max Homa, from the right rough, maybe not as bad a lie, but from a similar yardage, hit it exactly where Keegan Bradley’s caddie was trying to sort of coach him into, that left bunker. Pretty good spot. Likely not make worse than bogey from that left bunker. And again, that’s not a bad thing on the most difficult hole on the golf course. But Max Homa didn’t make bogey. Made about a 9-footer there for a clutch par and a two-shot swing.”