‘Come on!’: Max Homa holds off Keegan Bradley for victory on Mother’s Day 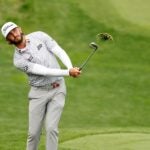 “This has been a fun day of golf.”

Those were Jim Nantz’s choice words as Keegan Bradley reached the 18th tee Sunday evening at TPC Potomac. For Bradley, it was much more of a grind, starting the day with a two-shot lead and reaching that 72nd hole with a one-shot deficit.

What Nantz was enjoying, like all of us, is exactly that: the grind. Bradley and Max Homa and every other golfer atop the leaderboard grinded through the Wells Fargo Championship this weekend. Brutal weather conditions at an always-ready-to-be-tough golf course. And for the golf-loving fans at home, that is some fun golf to watch.

Bradley himself made two double bogeys Sunday to lose that lead, but also made five different birdies to offset the miscues. Homa was the main benefactor, making five birdies on his own, creating a three-shot lead late, but making things interesting with three bogeys, too. Anyone who anointed Homa victorious on the 15th hole had not watched this round, nor this tournament.

When Bradley stood on that tee, he needed to make something happen. His normally poor putting had turned brilliant this week, leading the field in Strokes Gained: Putting. Before this week, he ranked 151st on Tour. If he could just get himself a putt for birdie, perhaps the magic would continue.

The grind didn’t stop. Bradley launched his tee ball high and along the right edge of the fairway. If he turns his driver face one more degree left, perhaps he finds the short grass. Instead, he found the right fairway bunker with a steep lip in front of his ball. His next swing nearly topped the ball in the bunker, sending it rolling out into the fairway, well short of the green. This one, for Bradley, was not to be.

“It’s that moment of trying to do everything fast,” Nick Faldo said of that fateful bunker swing.

This was only going to be a fun day of golf for Homa, now a two-time winner at the Wells Fargo and a four-time winner on the PGA Tour. The 31-year-old spent his afternoon holing important putts for birdie, essential putts for par, and keeping everything generally on the straight-and-narrow.

When the final putt dropped, he pumped his fist and shouted aloud for all to hear: “Come on!”

After embracing his caddie, shaking hands with this competitor, Homa took a deep breath and turned to CBS’s Amanda Renner for the champion’s interview — something he’s getting awfully comfortable doing.

Sometimes it’s as simple as that. Rest assured, it really wasn’t. Bradley and Homa punched back and forth throughout the afternoon, fully aware that Bradley’s starting score – eight under — was probably going to be good enough to do it. The two made the same score on just five of the final round’s 18 holes. No matter how well Homa played, or how much Bradley stumbled, the long rough and wet conditions and tough course didn’t allow any hole to pass as easy.

He hit just enough good ones and avoided hitting too many bad ones, boiling golf down to its most elemental core. And yes, making it very fun to watch.