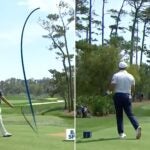 Bryson DeChambeau and Lee Westwood hit some of the most wild tee shots you'll ever see a pro hit on the 4th hole at TPC Sawgrass on Sunday.

If you were rooting for some chaos during the final round of the Players Championship, you didn’t have to wait long.

After a ho-hum start to the round for Lee Westwood and Bryson DeChambeau in the final pairing, the duo stepped to the tee at the par-4 4th hole settling into a groove for their Sunday battle, but the swings they produced were anything but championship quality.

DeChambeau took the tee first with a fairway wood in hand, but when he made contact with the ball, the explosive contact he has been come to be known for was absent. Instead of rocketing off the clubface, the ball shot toward the water in front of the tee box with top spin.

“That was nearly a shank,” remarked analyst David Feherty.

Close, but a cold top might be a better explanation.

Westwood then took the tee with a golden opportunity to create some separation between himself and DeChambeau. He selected a fairway wood as well, reared back and made solid contact. Unfortunately, the ball flight was nothing near what he had in mind as the ball banana-sliced well right of the fairway and into the water.

“What is that?” said analyst Paul Azinger. “What have we seen?”

DeChmbeau ended up carding a double on the hole, while Westwood was able to save bogey.

The Players might not be a major, but the pressure of the prestigious event still seems to be wreaking havoc. The best trick you’ll see at the PGA? Abraham Ancer with a ball marker

Who will be the low man in the Woods-Spieth-McIlroy supergroup?

Jordan Spieth still isn't over his 'annoying' Masters, but the PGA is a good start