Tour Confidential: Who will win the Players Championship? 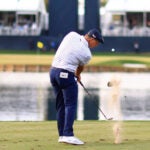 Bryson DeChambeau hits his tee shot on Saturday on the par-3 17th hole at TPC Sawgrass.

Check in each day of this week’s Players Championship for the unfiltered opinions of our writers and editors as they break down the hottest topic in the tournament, and join the conversation by tweeting us @golf_com.

Who’s ready for DeChambeau-Westwood II? Lee Westwood shot a 68 to take a two-stroke lead over Bryson DeChambeau after Saturday’s third round of the Players Championship — meaning the two will play in the final pairing one week after the bomber and the Brit were paired together in the final pairing in the final round of the Arnold Palmer Invitational. DeChambeau won that one. Will he this week? Will it be Westwood? Or will it be Justin Thomas or Doug Ghim, who are each three shots back? Or maybe someone else? Who do you got as we enter Sunday’s final round?

James Colgan, assistant editor (@jamescolgan26): My heart tells me Westwood, but my brain tells me it has to be Justin Thomas. His confidence is sky-high, and for good reason after Saturday’s 64. (How often in a big event do we hear a pro say he wishes every round of golf could be as easy as his moving day?) I like JT to ride that bravado into another big round and another win on Sunday.

Josh Sens, senior writer (@JoshSens): This is finally the time Westwood gets it done. His ball striking is in peak form, and his head is in a great place. That he’s still not a world-beater around the greens won’t matter. The rest of his game will be enough for him to get it done.

Josh Berhow, managing editor (@Josh_Berhow): Westwood hasn’t made a bogey since Thursday, and while we can look at that optimistically, I will go the other route. He’s due for a couple of blemishes and hasn’t closed out enough 54-hole leads on the PGA Tour for my liking. Too much trouble looms here. I’ll go with a Bryson victory.

Alan Bastable, executive editor (@alan_bastable): My heart, like Colgan’s, also whispers Westy, but my quads, glútes and triceps all scream Bryson. If I’m either one of them, though, the guy who scares me most is Jon Rahm (nine under, four back), who has grown more comfortable by the day: 72-68-67. What does Sunday hold for Rahm? A 66 and a maiden Players title is not hard to fathom.

Nick Piastowski, senior editor (@nickpia): Lee Westwood. The game is right. The mind is right. I’ll toss one more name out there — Paul Casey. Swap a triple-bogey 7 for a par 3 on 17 during the first round, and he’d be in the lead. Sadly, you can’t do that — I’ve tried on my scorecards — but it shows you the golf Casey’s playing this week.

Dylan Dethier, senior writer (@dylan_dethier): I said Justin Thomas to start the week, and out of stubbornness, I’ll stick with him now. People always say it’s tough to back up a great round with another great round, but I’m not sure the numbers really bear that out. He’s playing well and should continue to. Thomas wins at 15 under.