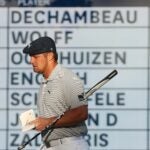 Bryson DeChambeau posited his name into golf history on Sunday by winning the U.S. Open, his first major championship. The 27-year-old capped off a remarkable week at Winged Foot with a final-round 67 to finish the week at six under.

The victory was impressive in itself, and even more so when put in the proper historical context. DeChambeau shot the only under-par round in the field on Sunday en route to becoming the sixth golfer ever to win both the U.S. Amateur and the U.S. Open. He won by six strokes despite hitting only 23 of 56 fairways for the week, the fewest by a U.S. Open champion since 1981, yet still managed to hit 64 percent of greens in regulation.

But while he played remarkably well, it felt strange to hear NBC lead golf analyst Paul Azinger look at Bryson’s Sunday performance through the lens of history. Historic distance? Sure. But did we really witness Bryson complete one of the great all-time final-round performances at the West Course this week?

One stat says the answer to the question is an emphatic yes, and it comes courtesy of the 15th Club’s Justin Ray.

DeChambeau’s strokes-gained performance is nearly as remarkable as the circumstances that led to his victory. The near 40-pound weight gain and complete recreation of his body and swing. The 20-plus yard increase in driving distance from a year ago. The U.S. Open final round. The U.S. Open victory. All of it improbable, and all of it equally historic.