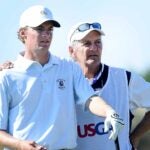 Tyler Strafaci's mental approach carried him to victory at the U.S. Amateur this weekend.

There’s a reason why every golfer has heard some variation of the saying, “the hardest distance in golf is the six inches between your ears.”

The reason? Golf is as difficult mentally as it is physically, a fact that’s as true for those playing $2 Nassaus as it is for those competing in the biggest tournaments in the sport. And if you don’t believe us, just ask newly crowned U.S. Amateur champion Tyler Strafaci, who candidly admitted he was battling nerves as much as he was battling the conditions at Bandon Dunes during his semifinal match Saturday.

“I actually talked to Andy Ogletree this morning, and I said, ‘Bro, I’m not going to lie, I’m pretty nervous. I’ve never been in this spot before,'” Strafaci said.

It’d be hard to blame the rising Georgia Tech senior for his angst. On Sunday, Strafaci stood on the precipice of realizing a dream 85 years in the making — the time since his grandfather Frank won the 1935 Public Amateur himself.

In preparing for his final matches, Strafaci leaned on Ogletree, his two-time All-American Yellow Jacket teammate and last year’s U.S. Am champ, for advice. And Ogletree delivered a simple — yet astonishingly effective —tip.

“[Ogletree] was very good,” Strafaci said. “He told me, ‘You just have to understand, the other guy is as nervous if not more nervous than you are.'”

Rather than focusing on his nerves, Ogletree recommended Strafaci hone his focus on something different.

“That kind of got me in a better mindset,” Strafaci said. “He said, ‘Just make sure you do something to kind of take the pressure away.’ He said, ‘Just stare at your yardage book for a while or just get zoned in.'”

With the pressure off Strafaci, he hit a slew of remarkable shots (including a gutsy approach into the 18th green) en route to victory at Bandon on Sunday night.

It might not be a high-tech way to improve your mental game, but if it’s good enough to win a U.S. Amateur, it’s worth a shot during your next round.