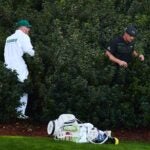 Bryson DeChambeau's caddie Tim Tucker made the save of the day at No. 13.

AUGUSTA, Ga. — To hear the buildup, Bryson DeChambeau’s tee shot on No. 13 at Augusta National on Thursday was likely to determine golf’s entire future. This was the par-5 where DeChambeau was supposed to hit a high, towering draw, cutting the corner and reducing one of the game’s most iconic holes to driver, flip-wedge. Brandel Chamblee (who has, on occasion, been accused of hyperbole) called it the most anticipated shot in the history of golf.

Whether or not that’s true, DeChambeau’s 13th hole looked nothing like a revolution. Instead, it looked distinctly like, well, golf. It featured a poor shot, a bad decision, a provisional ball, a search-and-rescue operation, a chunked chip and seven out of DeChambeau’s 70 shots. So how did it happen — and what did it teach us?

He flared his tee shot out to the right, where his ball settled on a bed of pine straw. A tree directly obstructed his path to the hole, and his ball sat on a severe right-to-left slope, 194 yards from the hole. The play was obvious: He should lay up. It was the fourth hole of the tournament, he had shown zero command of his golf swing and the shot required was a hard cut off a draw lie with trouble short, long, left and right.

Did he think about laying up?

“Yes,” he said after the round. “Yes, I did. I’m greedy. Sometimes I can get a little greedy and I like taking risks.”

He didn’t lay up. He didn’t even discuss the possibility with his caddie, Tim Tucker. Instead, DeChambeau selected a club and went for the hero shot. The ball came out hot, and long, and left, and it flew over the greenside bunker and disappeared into the bushes beyond. Those are thick bushes, which meant this was a potential lost ball — and disaster in the making.

Left with no choice, he hit a provisional, and this time he over-corrected — that second ball over-sliced and fell limply into the creek short and right of the green.

The most important part of DeChambeau’s day was what happened next: Tucker found his first ball in the bushes. That meant he could take an unplayable lie, and instead of dropping from the creek and hitting his sixth shot he was able to drop from the bushes and hit his fourth. How worried was he that he wouldn’t find that ball?

“Very!” he said emphatically after the round. “Very, because I hit my other one in the water and that was not going to be a fun number. I didn’t want to do that.  I had to find it.”

DeChambeau had caught a break, but he didn’t take full advantage: he followed with a chunked chip (albeit a difficult chip) and a missed putt and limped away with a double-bogey 7. Still, it could have been worse.

To paraphrase philosophers Nagel or Bieber: What does it mean? What did No. 13 show us?

First of all, it served as a reminder that DeChambeau is very much a human golfer. He’s not immune to nerves, nor temptation, nor overaggression. It reminded us, too, that his bomb-and-gouge style has its potential pitfalls, especially in the short-term. He insists (and has shown) that this aggressive style pays off over time, but if his driver is a little off, things can get weird fast.

It also reminded us that we don’t need to coronate DeChambeau right away. There’s a new level of attention that comes from being the sport’s main event, and DeChambeau drew just as much, if not more, spectator and media attention than Tiger Woods did on Thursday. Gary Player and Jack Nicklaus focused much of their press conference Thursday morning on issues relating to DeChambeau’s newfound length. Si Woo Kim paused his pre-tournament prep to watch DeChambeau hit a few drivers on the range. Peyton Manning was among the green jackets watching DeChambeau’s first tee shot. Increased scrutiny can be challenging. He’ll continue to face increased scrutiny.

It’s also useful to put DeChambeau’s 13th hole in the context he himself provided. He said on Tuesday that he’s playing Augusta National as a par 67, where the par-5s play as par-4s and the 350-yard 3rd hole plays to a par-3. By those standards, DeChambeau’s 13th hole was a triple-bogey 7 — but he played his other 17 holes in even par.

Finally, it means that even on a day when DeChambeau looked distinctly off his game, he got around Augusta National in 70 shots. It means he’s still distinctly in the tournament. It means that even though he gave away three shots on one hole, he picked up little quarter- and half-shots elsewhere: A bombed drive over the fairway bunker on No. 5, and a nuked hybrid up the hill on No. 8, and a mid-iron into the 15th green.

“At the end of the day I should have been smarter and hit it out,” DeChambeau said of No. 13. “I should have taken my medicine and hit it on the green. But hopefully tomorrow I’ll hit it in the fairway and have a different opportunity for birdie — if not eagle.”