Inside a different but familiar scene as Jack Nicklaus, Gary Player open 2020 Masters 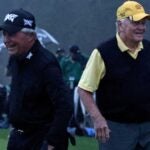 Gary Player and Jack Nicklaus on the first tee on Thursday at the Masters.

AUGUSTA, Ga. — Thursday morning at Augusta National was dark, foggy, moody, dramatic. Yellow Masters flags and white-and-green Masters scoreboards loomed from the mist. And at 6:45 a.m., some 12 minutes before sunrise, the first tee at the Masters was ringed with green jackets — each awaiting the arrival of golf royalty.

This is an undeniably different Masters. No fans. Many masks. Mid-November. But at this particular Thursday morning tradition, things felt distinctly familiar. Sure, it was darker and damper than usual, and an April Masters doesn’t typically require floodlights to illuminate the grounds. But there was plenty of energy, with golf’s biggest event just minutes away, and there were plenty of people, too: Between members, guests, media and tournament staff, a critical mass of people gathered to watch Jack Nicklaus and Gary Player hit their the opening tee shots.

The high-powered party emerged from Augusta’s well-lit clubhouse escorted by ANGC chairman, Fred Ridley. There was Player, dressed head-to-toe in black, as always. And there was Nicklaus, wearing his trademark yellow shirt, yellow hat and yellow glove, each hidden beneath a black sweater vest. His wife Barbara accompanied the group wearing a white caddie jumpsuit.

It takes a lot to interrupt the pre-round routines of top-level golfers, but Player and Nicklaus have that kind of cache. Sandy Lyle, who was off in the first tee time, came over to observe. Jazz Janewattananond, playing in his first Masters, snapped a photo of the scene. Bones Mackay, caddying for Jimmy Walker this week, gazed fondly at the familiar scene. Caddies and players on the adjacent practice green halted their warm-ups and stood at attention.

They were hardly the only high-profile attendees — among the members taking in the scene was NFL commissioner Roger Goodell, who stood slightly apart from the crowd in a lavender polo.

“We’re so thankful that we’ve been able to stage this event safely,” Ridley said. “And we’re very excited to get started. Joining me this morning are two of the greatest golfers the game has ever known. Legends who have made history here at Augusta National for more than 60 years, earning an unbelievable nine Masters titles. It gives me great pleasure to welcome these icons of the game back to this special tradition of honorary starters.”

As the drizzle intensified, he introduced Player, the 85-year-old three-time Masters champ. Player is a gym rat and still makes a spectacular move at the ball; he ripped one down the fairway.

Then Ridley introduced Nicklaus, citing his 18 major championships, six Masters titles and his “dominance of the sport for decades.”

Nicklaus grinned and motioned to the crowd to back up, as if he’d hit them. But he striped his tee shot, too, watching it just long enough to see it disappear into the darkness in the direction of the first fairway.

In the background, the Masters participants readied themselves for their own opening tee shots. Corey Conners, C.T. Pan and Lucas Glover hit their final practice putts and headed for the first tee.

As the crowd dispersed, Nicklaus and Player lingered for a short while, chatting with some of the attendees, Jim Nantz included. It was still dark enough that tournament officials decided to push tee times back 10 minutes. After a few minutes, Jack and Barbara made their way back up towards the clubhouse, job well done. The November Masters was underway.

There are golf addicts, and then there's former NBA player J.J. Redick