10 things Bryson DeChambeau revealed during a livestream with fans 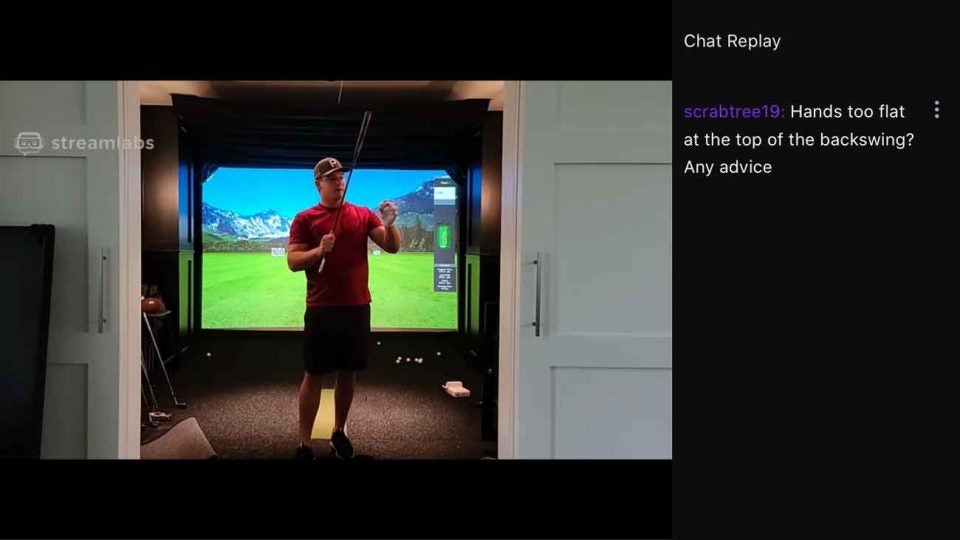 Bryson DeChambeau during a livestream with fans on Sunday.
twitch.tv

Bryson, the online fan asked, what are your tips for more distance?

The question couldn’t have been teed up any more easily on Sunday for Bryson DeChambeau, who has devoted the past few months in search of that answer. He’s found it, too. DeChambeau sits atop the PGA Tour’s driving distance chart — and during the hiatus due to the coronavirus, he’s working to remain there.

“Bro, you got to get into the gym and up your weight,” DeChambeau said on a Twitch video entitled “Golf lesson/practice stream,” where he answered questions for over an hour. “You got to have a lot of mass to be able to produce a lot of ground reaction force, to function off of the ground, to press off of the ground.

Yes definitely will have more. Today’s was a lot of fun! https://t.co/cLHPqmGMVq

What about rotation and flexibility, another fan asked.

“Rotation and flexibility is your ability to contract your transverse abdominals far to the left,” DeChambeau answered. “People would say you need to do stretches and all of that. I would be very careful with doing that. I, if anything, go on a rotary weight machine and try and go as far as you can both ways, rotate as far as you can both ways so that you can create strength through motion.

Later this week, DeChambeau said he will do a charity golf/workout stream. And he believes he has the time. When asked when he thinks the Tour will return, he said, “I have no idea when we’re coming back, guys.”

Fitness
How’d he do that? Inside Bryson DeChambeau’s quest to get ‘massive’

DeChambeau also answered questions on the game in general:

Do you think golf academies with a 4:1 ratio are beneficial?

“If you’re trying to make money, yeah,” DeChambeau said. “If you’re trying to provide genuine insight to helpful golf tips, not just stuff that’s mainstream and everybody’s trying to do it — not to knock on anybody or anything, there’s the Hank Haney method, you had Butch Harmon, you had all of these guys teaching great players, but it was kind of a packaged box model, where you box it up and say, ‘This is all of the things you need to be good at.’ And a lot of golf instruction has actually been for each generation or each little time frame a corrective mechanism for what was previously taught.”

“Most great golfers have a pretty quirky swing in general, besides Adam Scott or a couple unique ball strikers,” DeChambeau said. “They’re able to time those motions up really well. The ones that have the funky-looking golf swings, I’d watch out for those guys. Those guys have figured out something in a way that allows them to repeat their motion consistently.”

“Rory’s swing is incredible,” DeChambeau said. “No, no, Rory’s swing is actually very similar to mine. He just has a little bit more wrist motion, but his motion is pretty much the way I tried to design it. He swings it inside and has a lot of whole loft so he rotates and his hips stall and he moves through this way. I try to do the exact same thing as Rory.”

“I got this new big shaft,” DeChambeau said. “This is actually pretty cool. This is a little secret that we found Thursday night of the Players before it was canceled. So I would have been using that during Players week, but unfortunately it got canceled and I couldn’t showcase it to everybody. This putter is going to be unbelievable. The stability in it is ridiculous. I’ve never seen a putter be that consistent off the face. It’s pretty amazing.”

How to stop hitting a slice with the driver

“I’m sure a lot of people have gone over this throughout the years trying to fix the slice,” DeChambeau said. “And I can tell you the easiest way to fix a slice — and this is no joke. All the slice is is improper body motion. And one of the biggest problems is when somebody’s hitting a slice is not over the top — that’s going to create a slice, and I get that; it should be easy to correct if you drop it more inside.

“How do you get this face closed? So what I’ve figured out is you have to understand the hand and wrist position that you have in order to produce a proper draw. All I’m talking about is, you take this right arm, and you turn it to where it’s internally rotated. If you internally rotate it, the face closes. Yes, you’re going to have to redirect the motion — that’s what everyone talks about. But nobody talks about closing the club. If you do that, you can hit draws all day long.”

How to be more consistent

“It’s a play on repeatability,” DeChambeau said. “And somehow you got to move your body in a repeatable manner. Personally for me, I’ve tried to eliminate as many variables as possible. I’ve turned my left arm internally rotated, and then I externally rotate the lower left forearm. This is a fixed lever system, where I can’t move this anywhere but here pretty much. That’s why I look so rigid and stiff sometimes. But a machine looks rigid and stiff all the time. That’s why it’s so consistent in producing motion. So I try to limit as much mobility in my arms as possible to create the most repeatable face conditions at impact.”

What are some good chipping drills?

“One of my favorite chipping drills, and this works for anybody,” DeChambeau said. “So I go to the bunker and I draw a line in the bunker right behind the ball. And what I do, is I literally drive down right where that line is, and I want to create a divot that’s in front of that line. This is one of the most important drills for controlling contact.”

“Tension is a very good thing,” DeChambeau said. “People think you got to relax and don’t have too much tension and act like you have a bird in your hand. Well I can tell you for a fact that when you’re swinging it 120 mph with a driver, you’re not holding it loosely. That club would go flying into the range. You got to be able to hold it as tight as possible and control that force. So for me, I try to grip it as tight as I possibly can throughout the whole stroke. I want to be able to control the club. I want it to be like a vice. The greater the tension, the greater I know where that club is.”