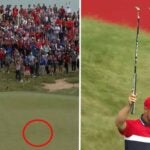 Bryson DeChambeau sent the Ryder Cup faithful into a frenzy on the first tee Sunday.

Bryson DeChambeau made his way to the first tee box at the Ryder Cup on Sunday at an uneasy moment for the American side.

Xander Schauffele and Patrick Cantlay had gotten their singles matches off to inauspicious starts — Schauffele 1-down after a sub-3-foot miss on No. 1, Cantlay tied but having airmailed a 70-yard chip 15 yards long. Directly ahead, DeChambeau’s teammate Scottie Scheffler faced a battle with World No. 1 and certified American killer Jon Rahm. DeChambeau himself faced a stern test in Sergio Garcia.

It wasn’t quite time to hit the panic button — not with the U.S. holding a whopping six-point advantage heading into Sunday. But for the Whistling Straits faithful hoping to catch the Packers’ 8 p.m. kickoff from home, the timing was starting to grow murky.

But then DeChambeau grabbed his driver and walked over to the tee marker on the first hole. A downhill, 373-yard par-4, No. 1 had always seemed primed for DeChambeau’s big-swinging exploits. At the start of Saturday afternoon’s fourball session, Bryson pumped his drive pin-high, fist-pumping in his ball’s direction as it cratered down toward the earth.

Now it was Sunday, and golf’s most enigmatic figure didn’t quite have the cushion to really go for it that he’d clung to a day earlier. The safe play was to poke something out into the fairway, which slopes down in the direction of the green. From there, he’d have 70 yards into an unguarded pin and an easy birdie look to start his match.

As it turned out, it didn’t quite matter that Bryson didn’t have the cushion to go for it on Sunday. He didn’t need it.

Golf’s longest hitter stuck his tee into the ground, took a few practice swings and addressed his ball. His wound back the club and turned, sending his signature, thrashing swing down toward the earth.

“340 to the front edge of the green, giving it a go,” said NBC course reporter John Wood.

“Why wouldn’t he?” replied Dan Hicks.

No sooner were the words out of his mouth than they were engulfed by the roar of the American faithful, who watched as DeChambeau’s ball landed on the putting surface and tumbled closer to the flagstick. He’d driven the green, his tee shot traveling some 354 yards.

“And that one is on the green,” Hicks said. “Much to the delight of the thousands around him.”

DeChambeau was already on his way down to the green by the time the cameras returned to him. “U-S-A” chants exploded from the stands as he raised his putter in the air.

“He’s just the most entertaining player in the game by a wide margin now,” Paul Azinger added. No doubt about it, a full-blown showoff, he can’t wait.”

But Bryson’s work was only half-fulfilled. He still faced 40 feet for eagle. A few seconds later, the American faithful rumbled again. He’d drained the eagle and moved his match to 1-up.

DeChambeau took his hat off as he walked to the second tee and waved it toward the masses around the green, who returned a thunderous ovation. The Americans were off and running on Sunday at the Ryder Cup.