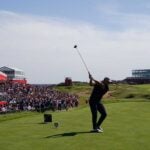 Bryson DeChambeau pulled driver all over Whistling Straits, starting on the drivable 1st.

Curry was taking in the Cup from behind the 12th green when Bryson’s approach bobbed and weaved between two European balls on its way to the pin. Those who weren’t locked in on the mini game of plinko could see the two-time NBA MVP was raising the roof and chanting DeChambeau’s name. But no more watching tee shots on the exciting par-3 anymore. Curry was going to follow DeChambeau into the house. And he did.

So Steph traipsed around the mounds behind the green and plopped down next to Phil and Amy Mickelson behind the 13th tee. DeChambeau pulled driver out of his bag, but then put it away. Fans groaned, of course. Mickelson rose to discuss the club choice, but Scottie Scheffler ended the discussion silently. He grabbed long iron and showed it to his teammate. Go for it, big guy. DeChambeau yanked his favorite prop out once more and thrust it toward the fans. Playing to the crowd is definitely his thing, especially when they’re calling him by his real name. He put everything into that tee shot, and sent it bounding down the hill. Was it good? “It was startling,” one spectator said. They had no idea it was coming. It flew the entire way to the hole and missed the green by a couple of yards, rolling into the greenside bunker — 392 yards away.

Of course it wasn’t even his best drive of the day. There was his poke into the wind on 15 that placed him 56 yards ahead of Hatton. There was also the monster on the 5th hole, during which DeChambeau moved dozens of spectators out of his way in order to take a preposterous line and send his Bridgestone 417 yards up the winding fairway. It dropped jaws in the media center as well as on the tee box.

“I knew if it was a little downwind, I could take a unique line, and I luckily was able to have that wind today,” DeChambeau said later. “It was 20-plus [mph], and I said to myself, Alright, I have to aim at the green. So I did. I just aimed at the green and bombs away.”

For context of what aiming for the green actually means here, Scheffler said his own line was between 200 and 250 yards left of DeChambeau’s. It’s the kind of individual shot that sends shockwaves through a match. Rory McIlroy, one of the longest players in the world, took a similar line in the next match, but came up 30 yards short. One of the longest is not the longest.

“It was a back-and-forth match, and quite an unusual one,” Rahm said afterward. He’s no slouch with the driver himself. “When you have Bryson do things like what he did on 5, you know you’re going to have a couple holes where a halve is going to be a very good score just because of the tee shots he can hit.”

Hatton’s caddie, Michael Donaghy, chose a simpler description: “It’s f—— obscene. You can compete against anybody, but that…”

He trailed off toward the end of his sentence, which felt fair. That expletive is not in negativity. It’s all complimentary. There is nobody like Bryson to compare to, and the Ryder Cup is a perfect place for it. And yet, the leaderboard read “TIE” between Europe and America when it all was over. Rahm and Hatton eked out a half point when the shortest man in the group pured a driver, 5-iron to five feet and curled in the putt for birdie. There are oh, so many ways to skin this cat called golf. Hatton immediately pointed at the blue mass of European teammates as they charged onto the green. You can’t blame them — it was their first positive tally since the day’s first match. Fending off America’s longest-hitting asset is a victory unto itself.