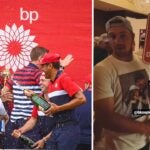 MESQUITE, Nev. — It’s been a good week for Bryson DeChambeau, the golfer.

For as long as he lives, Bryson might not be able to top the eclecticism of the last seven days — time he’s spent split between two of the furthest reaches of the golf world. First, Bryson was in the heartbeat of one of golf’s most unique venues — serving as part of the U.S. team at the Ryder Cup. Almost immediately after, he hopped on a plane bound for the middle of the desert to compete in the World Long Drive Championships. (As one does.)

As for Bryson DeChambeau, the partier? Well, the week has been decidedly less interesting.

The post-Ryder Cup victory celebration is one of golf’s most hallowed grounds. It is a place where players, caddies, captains, vice captains, friends and families alike are encouraged to throw down. The stories of post-Ryder Cup sloppiness are almost as legendary as the Cup itself.

But as Bryson explained after a thunderous opening-round performance at the World Long Drive Championships on Tuesday, his schedule didn’t quite leave time for a hangover.

“Today I’m okay, yesterday I wasn’t,” DeChambeau said with a laugh. “I didn’t get much sleep. I didn’t drink that much because I knew I was playing today and I wanted to make sure I was ready to go.”

Still, Bryson’s date with long drive destiny wasn’t enough to get in the way of a little fun — particularly with the t-shirts fashioned by some of his U.S. teammates.

“I stayed up till about 1 a.m. and we put on the ‘Step Brothers’ shirt which was the funniest thing in the world. I thought it was awesome,” DeChambeau said, referencing the shirts worn by U.S. players featuring he and Brooks Koepka’s faces superimposed onto those of Will Ferrell and John C. Reilly.

DeChambeau and Koepka made public amends at Whistling Straits, surprising even the most hopeful optimist at the beginning of tournament week. Now, he says, he’s excited for the next chapter in their relationship as competitors.

“There still will be competitiveness between us, and I think it’ll be great for years to come,” he said. “But as of right now, it was fun for us to come together that week and bring it all together for team USA.”

And as it turns out, the Ryder Cup afterparty is still a pretty wild place, even for someone who’s taking it easy.

“It absolutely exceeded all my expectations,” DeChambeau said, flashing a wry smile. “There were a lot of things that cannot be repeated.”