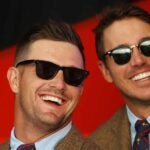 One of the biggest topics surrounding the U.S. Ryder Cup team entering Whistling Straits was focused on the relationship of Bryson DeChambeau and Brooks Koepka. Could they get along?

Turns out they could — at least for one week — and it was fitting that after three days of 28 matches, overflowing emotions and more, the week also ended with a little dose of DeChambeau and Koepka. U.S. captain Steve Stricker, in the aftermath of the victory, said they wanted to play together during the week, and Justin Thomas even made the two hug it out to end the U.S. team’s post-win press conference.

But it didn’t stop there. Thomas posted a photo on his Instagram story of the Americans’ successful “team shirts.”

For anyone who has watched the movie “Step Brothers,” you’ll understand this reference. And if you haven’t watched the movie “Step Brothers,” you should probably do so, because it’s a pretty funny movie with Will Ferrell and John C. Reilly. We have proof Thomas wore one of the shirts. Who knows how many others put theirs on. Although we know of at least one more person who did — DeChambeau himself.

At least we can call this a happy ending (for now) to the DeChambeau-Koepka storyline.