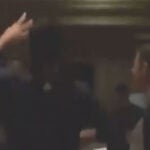 Rory McIlroy didn’t have the best Ryder Cup week, and Europe didn’t either. McIlroy was 0-3 the first two days before he won his Sunday singles match, but it was too little, too late. The Americans downed Europe 19-9 on Sunday at Whistling Straits.

Tensions were high on Saturday, as conceded putts, a rules controversy and an argument over a drop headlined the day, but Sunday was basically drama-free, as the U.S. needed only 3.5 points to win the Cup and secured that with more than half the matches still on the course.

Afterward, however, is when the big-time celebration started. Players got beverages for the course as they cheered on the remaining matches, then came an interesting and entertaining press conference, but the real fun (probably) happened when the cameras were off and players left the course.

The U.S. team had much to celebrate on Sunday night, and McIlroy even joined in. Xander Schauffele’s caddie, Austin Kaiser, shared a video on Instagram of McIlroy on the dance floor with U.S. team members and friends. And, for as great as McIlroy looks while swinging the club, we’ll have to call his dancing skills a little questionable. Check out the video below.