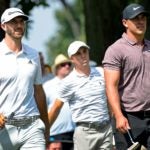 Brooks Koepka is lacking no confidence heading into the final round at the PGA Championship.

Brooks Koepka has never lacked for confidence. After wrapping up his third round of the PGA Championship, that self-assuredness was on full display when he was asked how he felt about his chances going into Sunday pursuing Dustin Johnson.

It was a not-so-subtle jab from the four-time major winner at his old (albeit less-accomplished-in-the-majors) friend. But maybe that killer instinct is just the reason why Koepka has been so successful in the big ones. No one is safe — not even his workout buddies.

Koepka also used the occasion of his post-round interview with CBS’ Amanda Balionis to point out DJ’s major total, as well the rest of the mostly still-new-to-Sunday-major-pressure leaders, including Scottie Scheffler and Cameron Champ.

“A lot of the guys on the leaderboard, I don’t think have one,” he said. “I guess DJ has only won one, but I don’t know the other guys that are up there.”

Koepka also offered some thoughts on the topic to Golf Channel’s Todd Lewis:

The comments may have come off as a bit dismissive of his competitors, but Koepka has a point. Of players within four shots of the lead heading into the final round, he is the only one with multiple major titles. In fact, to find a player with multiple majors on the leaderboard, you have to go all the way down to Rory McIlroy, winner of four majors, who is T-43 at even par. No one within striking distance has converted in big moments more than Koepka.

And to add to Koepka’s confidence, two of the players he’s chasing, Scheffler and Champ, have quite literally never been in this position before. Champ has won twice on the PGA Tour, but he has fewer made cuts in majors than Koepka has wins. As for Scheffler? This is his first-ever PGA Championship. In fact, this time last year he was still competing on the Korn Ferry Tour. It’s a safe bet that Koepka will get a more restful night of sleep than Scheffler and Champ.

“It’s just a comfort level,” Koepka said. “I feel very comfortable around the lead in the big events.”

Hard to argue with that when examining his career record. He’ll look at add another chapter to his legacy tomorrow when he tees off at 4:30 ET.