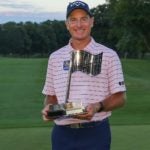 Jim Furyk became the 19th player to win in his Champions Tour debut.

Justin Thomas stole the spotlight last week as he returned to the winner’s circle and reclaimed World No. 1, but there were many other happenings in the world of golf. Here are four stories you might’ve missed.

Players and caddies on the PGA Tour wore rainbow ribbons at TPC Southwind last week in honor of Camilo Villegas’ late daughter, while on the Korn Ferry Tour, players and caddies at the Pinnacle Bank Championship also honored a late family member of one of their own.

Bob Whitney, the older brother of KFT veteran Tom Whitney, committed suicide in January after a battle with depression. To honor his memory, players and caddies sported purple-and-turquoise ribbons, symbolic of suicide awareness and prevention.

The KFT operations truck took their support of the Whitneys one step further as they made a $5,000 donation in Bob’s honor to 22Kill, a nonprofit organization providing traditional and non-traditional mental wellness programs for veterans, first responders, and their families.

“I’m just grateful for the Tour; their help through this whole process,” Whitney said. “I can feel the love and support from all of them. All the players and caddies and staff around me — I feel so much love just around this community.”

Whitney ultimately missed the cut, but the week was still no doubt a special one for his whole family.

While the PGA Tour has been back for almost two months, the LPGA Tour made its return to golf last week at the Drive On Championship with Danielle Kang claiming the title. Historic Inverness Club served as the venue and provided a major-championship quality test as just five players finished under par, led by Kang at seven under.

“I’m so thankful for our commissioner [Mike Whan] and the entire LPGA staff, because I love the decisions that they made,” Kang told Golf Channel after the win. “I am so thankful in how safe they made it for us … I’m so thankful that they’re going out of their way to make sure that we can play.”

The win was Kang’s fourth on the LPGA Tour and first on American soil since the Women’s PGA Championship in 2017.

Jim Furyk made the most of his Champions Tour debut at the Ally Challenge as he claimed a one-stroke victory over Brett Quigley. Furyk entered the day one shot behind Quigley, but birdied the 15th hole to take a lead he would never relinquish.

Furyk is the 19th player to win in his Champions Tour debut, and the first since Miguel Angel Jiménez won the Mitsubishi Electric Classic in 2014.

“It feels good,” Furyk said. “Just excited to be able to come out here first week and play so well and get a win.”

Furyk will look to make it two in a row this week as he heads back to the PGA Tour to compete in the PGA Championship at TPC Harding Park.

Seth Reeves storms back to win in Omaha

Seth Reeves didn’t think he ever had a chance of hoisting the trophy at day’s end during the final round of the Korn Ferry Tour’s Pinnacle Bank Championship. But after a final-round 64, that’s just what happened.

Reeves started the day eight shots back of the leaders in Omaha, but quickly narrowed the gap with three front-nine birdies before closing in 30 on the back nine for the low round of the week. After teeing off two and a half hours before the leaders, Reeves had to wait and watch as five players came to the 18th with a chance to tie the clubhouse lead. None were successful and Reeves claimed his first KFT victory.

“Just really grateful to have won this tournament,” Reeves said. “I never thought I had a chance to win, and here I am the champion.”

Reeves’ eight-stroke, come-from-behind win is the largest on the KFT since 2010 and vaults him to 18th in the season-long points race.