Rogers Report: Brooks runs out of gas, and the greatest holiday card of all-time 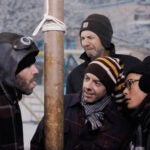 Hello friends, and welcome back to the Rogers Report!

It’s the most wonderful time of the year. We’re riding the PNC Championship high, Christmas is right around the corner and we might even get a peek at some Palm Beach residents in their holiday sweaters. I truly couldn’t ask for more (unless, of course you’re a relative of mine and doing some last-minute shopping). The golf social media whirlwind has already begun! Let’s break it down.

1. Brooks runs out of gas

Sometimes, off the golf course, the pros are just like us. Eamon Lynch shared these images of Brooks Koepka, who ran out of gas while driving a Rolls Royce last week. This exact same thing once happened to me. Okay, I was driving a 2001 Volvo Wagon, but I can still say with confidence that nothing will humble you faster than having to ask the gas station attendant for a plastic gas container because even though your car’s fuel gauge is right there, and even though it gave you fair warning, you still managed to run out. Add in what looks like a rainy Florida morning and you can be sure Koepka won’t make this mistake again.

2. Danielle Kang and Wayne Gretzky tee it up together

Wayne Gretzky snuck in a round of golf with Danielle Kang at The Grove XXIII over the weekend, and I can only imagine the kind of fun they had out on the course. From what I know about The Grove, I’m willing to bet they weren’t the only celebs on the course that day. Rumor has it (I listened to Paulina’s appearance on the Pillows and Beer Podcast) Janet and Wayne Gretzky recently relocated to Florida, so here’s to seeing more of them in the Sunshine State.

The only thing more impressive than Karl’s game is his sense of humor. This kid is like, really funny.

Every line he delivers in both of these interviews is pure gold, and he doesn’t even crack a smile afterward. Henrik is known to be one of the funniest players on Tour, so it’s safe to say the apple doesn’t fall far from the tree here.

TaylorMade has done it again. Just when I thought their 2020 holiday card was unbeatable, they took things to the next level with this video:

Everything here is amazing — and props to TaylorMade for pushing some cinematic boundaries. Wolff makes the perfect Flick from “A Christmas Story.” Tommy and Collin seem extremely focused. Sergio absolutely crushed the facial expressions, Rory went all-out for his “triple dog dare” line, and to the surprise of absolutely no one, DJ seems just a little bit out of it. It’s funny to think of these guys — some of the world’s top golfers and a few major champions — getting into costume and going over a script like they’re in a fourth grade Christmas pageant. Bravo, all! And thanks to TaylorMade for once again delivering an absolute treasure.

And lucky for us, it looks like we’re going to get some more content from this shoot.

An honorable mention goes out to Jena Sims and Brooks Koepka for their creative New Years card. We’re lovin’ it.

I know, I know. There’s a very solid chance that you’re all PNC-ed out after a weekend of Tiger and Charlie posts. And look, I won’t blame you if you call it a day on this article right now! The rest of the internet awaits. But if you do stick around, I’ll serve up some of the best tweets I saw over the weekend, free of charge.

These group photos never disappoint. Between John Daly dressed up as Santa, Team Woods grinning front and center, Nelly Korda holding it down for the women’s game and Justin Thomas, who appeared not to have gotten the business-formal attire memo, there’s a lot going on.

Max Homa’s Tweets never fail, and Chesson Hadley’s PGA Tour profile lists him as 6′4″ and 175 pounds, so I couldn’t help but laugh at this one. Great work, gentlemen.

It was a family affair for the Woodses at the PNC over the weekend. I love how all four of them showed up in Sunday red to show their support. In fact, Tiger’s pal, Rob McNamara, did as well.

That’s all I’ve got for this edition, everyone. I’ll study up over the holiday and report back next week!