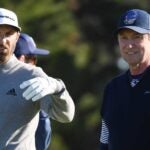 Dustin Johnson was on his way to winning the Masters last November, and player after player were asked about the genius of DJ. Memorably, Rory McIlroy gave one of the better touts.

“He’s smarter than you think,” he said.

None other than Wayne Gretzky, Johnson’s soon-to-be father-in-law, put that another way.

Appearing on the Steam Room podcast this week with hosts Charles Barkley and Ernie Johnson, the Great One shared another story from Johnson’s whopping five-shot victory. He was prompted by this question from Johnson: “So how has your golf game improved, or how has it changed, because — and for you folks that don’t know, Dustin Johnson is about to be your son-in-law because Paulina and Dustin are going to be married in April. … So has he helped your game or has he hurt your game?”

“Listen, one thing about Dustin, he’s a savant,” Gretzky said on the podcast. “The year he won the Masters — savant in golf — the year he won the Masters, on 13, the par-5, he hit it up to the right, in the rough. So he was in the rough, and it was in November that year, so the course was wet. And when he won the tournament, we were on the airplane flying back to Florida, which was one of the great flights of my life, with Dustin and our family and Claude Harmon; it was just wonderful.

“And I said to him, can I ask you one question. On 13, your second shot, you hit it about this high off the ground [gestures]. Because he laid up in front of the creek there on the par-5. And I said, did you miss your shot? He goes, no, no, no. He said, I hit a 4-iron because I had mud on my ball and I wanted it to run through the grass to clean the ball off for my next shot.

“And I’m sitting there going, who thinks of that? We would have taken a 7-iron, hit it in there, landed, had more on it, right?”

A savant indeed. And one who’s willing to pass on his knowledge, too. Gretzky shared a story of Johnson the volunteer teacher.

“So he really loves the game,” Gretzky said. “I was sitting in the grill one day, and he knows I never go up to the range. I don’t practice. I said it’s not going to change my game. I just want to go play, right. And I said, go hit some balls and I’ll watch some football when you come back. This older gentleman comes walking in, and he’s in tears, one of the members. And I go, oh my god, what happened out there? And he says, you don’t understand, I had the greatest hour of my life. Dustin walked by me and said, sir, can I help you with your game? And he worked on my game for an hour. That’s who he is. He’s a great kid, he’s a wonderful guy, he loves the game of golf and he knows a lot about it.

“But listen, I don’t practice. I’m like Chuck — I just like to have fun and go out there with my buddies. I’m not going to get any better. Like you in basketball, like me in hockey, I know how hard we work to get there. I’m not going to work that hard to become a four-handicap because I’m enjoying my life as an 11-handicap and I’m having fun.”

You can watch the entire podcast below.