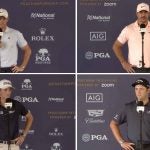 Among the interviewees on Tuesday were, clockwise from bottom left, Will Zalatoris, Rory McIlroy, Brooks Koepka and Jon Rahm.

There are media days and then there are MEDIA DAYS. Tuesday at the 2021 PGA Championship, at Kiawah Island’s burly Ocean Course, fell squarely into the second camp. Beginning at 9 a.m. local time with Jon Rahm and concluding at 5 p.m. with newly minted Masters champ Hideki Matsuyama, 13 players and three PGA of America officials addressed the press, both in person and via Zoom. (The day’s runaway MVP: the transcribers!) We mined all 14 transcriptions for the single most insightful, revealing or otherwise entertaining line from each and every presser.

Toward the end of Rahm’s presser, the conversation shifted to the Olympics. Rahm was asked about the added pressure South Korea’s Sungjae Im must feel, given that if he doesn’t medal in Tokyo, he will, under South Korean law, need to serve two years in the military, just as Im’s countryman Sangmoon Bae did. Rahm was unaware of the mandate (“Is that serious?” he said), but still offered a thoughtful response: “Even if you end up in the nicest branch of the military, it’s still one or two years he can’t play golf. That’s a big setback.”

Our first on-the-record super league commit! Well, not really, because Westwood added that an invite to the much-buzzed-about-but-still-not-a-real-thing league has not crossed his desk. But if it did? Westy’s all in. Westwood also was asked about whether the Saudi funding of the league should be “moralized.” Said Westwood, “You could do that about everyone, couldn’t you, so I’d prefer not to get into that.”

“We can use our rangefinders during competition?”

Yes, Tony! For the first time at a major, the PGA of America, somewhat controversially, is allowing players and caddies to use rangefinders in this PGA Championship. PGA of America officials believe it will help the “flow of play,” but several players, including Justin Thomas and Bryson DeChambeau, think it could actually slow down play. Finau, seconds after learning of the new policy, didn’t know what to think. “I haven’t had time to think about it,” he said. “But I’m sure I’ll just refer to what I’m used to, which is just looking at the yardage book, walking it off with my caddie. There’s a lot more numbers, I think, than just the flagstick for us. … I’ll tell my caddie and then we’ll do some work with it.”

“I still have days where it sucks.”

Brooks Koepka fielded 16 questions from reporters. Every one of them related to his troublesome right knee, which he had surgery on in March to treat ligament damage. Koepka, who missed the cut in his last two starts (at the Byron Nelson and the Masters), said he is able to hit every kind of shot and walk 18 holes with no pain, but that some days still are more of a struggle than others. “But those are getting less and less,” he said. “I’ve had one of those in the last month, so I’ll take it.” Koepka added that he doesn’t expect to encounter any health issues this week at the Ocean Course. “It’s pretty flat,” he said of the terrain. “Like I said, [the knee is] a million times better so it makes it so much easier.”

“I come from a world of disruption, and I think it’s inevitable — I actually think it’s healthy. You either disrupt or you get disrupted. That’s what this is.” — Seth Waugh, PGA of America CEO

Waugh, who was a Deutsche Bank Americas CEO before joining the PGA of America in 2018, has been exposed to his share of corporate raiding. As he sees it, the proposed Saudi-backed super league is, in essence, a hostile takeover, and needless to say, he does not approve. “Our view is that the ecosystem of the game works very well. It’s never worked better,” he said. “The partnerships that exist with ourselves, with the Tour, with the European Tour and really all the golf bodies are strong.” Waugh would rather not see a new deep-pocketed tour muck up that dynamic, and he said he has cautioned younger players against jumping ship simply for a big payday. “As you can imagine, you look them in the eye and you just say, Be careful what you wish for, because short-term gain feels good for a little while, but long-term gain is what makes lives.”

“The weirdest part is just when you’re out and about at a golf course or even at like a restaurant and someone is like, Hey, you know, hope you figure it out.”

Spieth is trending up. Everyone knows that. But up until the last few months, there was cause for grave concern. Nah, not really — he’s only 27, a supreme talent and endlessly hard worker already with three majors to his name. It wasn’t panic-button time, though many golf fans felt that it was. As he was finding his way through the darkness, Spieth said he tried to ignore what people were writing and saying — on social media, on websites, even by way of friendly advice via text. (“I’m not very good at responding to texts,” he said.) And now that Spieth is back in form? The pendulum of public opinion, he said, has fully swung back in the other direction. “It’s very exaggerated on both ends,” he said. “It’s like, what have you done the last couple weeks? I have one good Saturday in Phoenix and they’re like, Oh, so you’re back. It’s like, I shot one good round.” So, is Jordan really back? Ask us on Monday.

“Not to beat up on the manufacturers, but they just keep bending lofts stronger and stronger, and so you grab a 5-wood and you’re hitting it as far as your 3-wood and it doesn’t really accomplish the goal.”

That was Kiz’s frank and logical explanation for why so many players carry a 7-wood these days. This week, in particular, on the bouncy Ocean Course, Kisner said the club is especially practical. “I was looking for something in the 235 to 240 range,” he said. “That’s kind of where our threshold is into the par-5s and a lot of the par-3s, but as firm as conditions are getting these days, you’ve got to have it coming in there softly, and 2-iron is just not going to get the job done anymore.”

“We call it Blackout Collin.”

Zalatoris, the twentysomething du jour coming off his magical runner-up finish at the Masters, played on a U.S. Walker Cup team with Collin Morikawa. When a reporter compared Zalatoris’s rapid ascent to that of Morikawa’s, Zalatoris revealed the amazing nickname he and his Walker Cup teammates bestowed upon Morikawa: “He just goes on tears, winning amateurs by seven and eight and does things like hitting drivers under the gun to eight feet or whatever he did last year at Harding Park.”

“The ultimate test of nerve.”

That was Scotty’s assessment of the daunting par-3 17th on the Ocean Course that plays about 230 yards over water, often into a stiff wind, to a green that runs away from players. “I don’t know how holes get more difficult than that,” Scott said, adding that he has been hitting 4-irons and 7-woods into the green this week and “briefly discussed hitting a soft 3-wood in to see how that feels.” Added Scott, “It could be a decider for the whole event this week.”

Yep, Rory has really really missed having fans. (There will be about 10,000 spectators on site for each of the tournament rounds this week.)

“I’d kick myself forever if I didn’t do this.”

The 2021 Olympics was a hot topic on Tuesday. Westwood says he won’t play for England, citing family commitments and a rigid schedule (“I’m of an age where I need to make a plan and stick to that going forward, else my game suffers”), while Jon Rahm said he would “love nothing more” than to win a medal for Spain. Thomas echoed similar patriotism for his country, saying his has a “personal desire” to represent the United States. “I never had the opportunity to watch an Olympic golf event because it wasn’t a thing,” he said of his childhood. “It was something you couldn’t dream because it wasn’t a thing. Now that it is it’s an unbelievable opportunity, and I think I’ve made it pretty known my stance on playing. … It’s a tremendous honor.”

That’s how Xander (jokingly!) said he’d feel if his swing coach/father Stefan took on another Tour pro student. Stefan is a bit of a cult figure on Tour. With his hair in a bun and a cigar often wedged in his mouth, he exudes MAJ vibes on the range. He also is surely the only Tour coach who was a competitive decathlete. Xander said his father has a unique understanding of Xander’s swing because of how long they’ve been working together. “He got his hands on me when I was very young and he had his thoughts on the swing and implemented them at a very young age,” Xander said. “If you’re 40 years old or 30 years old and you’ve sort of been swinging the way you swing, I don’t know if he’d be the best person for you. You could argue differently. But if I was 35 years old and I didn’t have my dad as my swing coach, I’d personally look for someone that in all honesty brought 10 guys up on the PGA Tour or who works with 10 guys just because he’s probably seen more.”

“I suppose you could write a book on that.”

So said the two-time Open Championship winner when asked about what it takes to be a good wind player. And, in fact, at least one such book has been written, Golf and Wind: The Physics of Playing Golf in Wind, by Shantanu Malik and Sandeep Saha. Harrington said the problem is even good players just don’t practice playing in the wind enough. “You’ve just got to continue to try and fail when it comes to the wind and learn that you’ve got to commit,” he said. “Even though you could be aiming 20 yards left of the fairway at rubbish, you’ve got to commit to your shots.” As in golf as in life!

“I went into the closet where the clubs were. I looked at those clubs, and I was thinking about pulling one out, and then I thought, No, not today.”

The reigning Masters champ — who was T39 at the Byron Nelson last week in his first start since Augusta — was the last presser of the marathon day. So, of course, everyone wanted to know about his green jacket, if he’s flashed it around town and all that jazz. Turns out he’s only worn it twice, partly because he had to spend his first two weeks in Japan quarantining in a hotel room. And, no, he didn’t work on any drills in his temporary quarters (despite the convenience of a high ceiling). But it certainly crossed his mind at least one time.