‘You’ve got to embrace it’: Will Zalatoris reveling in newfound celebrity, Adam Sandler shoutouts 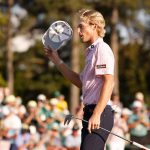 Will Zalatoris put on a show at Augusta National.

With all due respect to Hideki Matsuyama’s magnificent performance at Augusta National, the real breakout star of the 2021 Masters was 24-year-old Will Zalatoris.

If you were even half paying attention to the tournament last week, surely you caught glimpses of the slender Owen Wilson doppelganger making a mockery of the notion that first-timers can’t contend at Augusta National. All Will Z required was a mere 279 strokes to get around the place over the course of four rounds. That’s nine under, which was good for solo second.

More impressive than Zalatoris’s game, however, was his composure. He should have been a sweaty, trembling mess. Instead, he exuded all the casualness of Fuzzy Zoeller sipping vodka-sodas by the clubhouse.

Zalatoris — who is 6-foot-2 with a 28-inch waist — also has been likened to the actor Jared Van Snellenberg, who played a caddie in the 1996 film Happy Gilmore. On Sunday morning, Adam Sandler — who played the title character in Happy Gilmore — tweeted side-by-side pictures of Zalatoris and Snellenberg’s character with the caption: “Have fun today young man. Mr. Gilmore is watching you and very proud.”

Not missing a beat, Zalatoris — just hours after the biggest round of his life — replied to Sandler, “If you’re ever in need of a caddie again let me know. I’ll be better this time. I’m always available for you, Mr. Gilmore.”

On Wednesday, Zalatoris was back on the Tour grind, at Harbour Town, for the RBC Heritage. He was asked if he’s comfortable with his newfound celebrity. “Yeah, you know, if I didn’t like it, I’d probably need to find a new profession pretty quickly,” he said. “It just comes with the territory.

“The Owen Wilson comparison, the Happy Gilmore’s caddie comparison, Butch [Harmon] saying I look like a 1-iron without a grip on it, I think it’s hilarious. You’ve got to embrace it. … This is entertainment. This is obviously the really fun side of the job is — yeah, trust me, a year ago if you said that Adam Sandler was going to send out a tweet about me, I would have thought you were on something.”

Zalatoris has gone so far as to stamp his equipment with some of the fan commentary he’s been hearing.

“Wow, Owen Wilson” is now branded on one of his wedges. On another wedge he has “Mr. Gilmore, I’m your caddie,” and yet a third pays homage to Harmon’s quip.

“You’ve got to have some fun out here,” he said. “We’re playing golf. You don’t need to take this job too seriously.”

So is Zalatoris’s game. His technique is not textbook — his swing comes a little under the plane, and he arm-lock putts, a la Bryson DeChambeau, which has been the key to Zalatoris’s improved form. But he also plays a smart brand of golf.

“Just trying to give myself as many looks as possible,” he said. “People will see me knock something tight, like on 17 [on Masters Sunday]. I heard some comments of, ‘Wow, he’s firing at everything,’ and it’s like, ‘I’m aiming 13 feet left of that flag and I pushed it 13 feet and it ends up being perfect.

“The reality is a lot of guys do that out here, but I don’t really tend to overdo things. Into a par-5 I don’t need to hit the big high fluttery 3-wood in there and try to knock it tight and make 3. I think what I tend to do is give myself a bunch of really good looks and make sure you put myself on the green as fast as possible, and when the putter gets hot, the putter gets hot, just like last week.”

Then there’s Zalatoris’s grit, which he said he got from his mother, Catherine, who ran track at the University of Oregon in the 1980s. She specialized in 400 and 800 meters. “Basically, a sprinted marathon,” her son said Wednesday. “She’s the toughest woman I know. There’s no quit in that woman, and obviously I think I got a little bit of her genes.”

Zalatoris’s name would have been unfamiliar to many casual fans tuning into the Masters last weekend, but it’s not like he came out of nowhere. He won a U.S. Junior Amateur; he played on a stacked Walker Cup team with Collin Morikawa, Scottie Scheffler and Cameron Champ; he plays money games near his Dallas home with Jordan Spieth and Tony Romo. So, yeah, he’s been around.

Still, as recently as a couple of years ago, he was scrambling for mini-tour starts. Now, through fine play on the Korn Ferry Tour followed by a series of top finishes on the PGA Tour — including a T6 at the U.S. Open at Winged Foot last summer — Zalatoris has elevated himself to 27th in the world. (And yet he’s still not a PGA Tour member, which is, well, complicated — check out Kevin Prise’s excellent explainer here.)

On Wednesday, Zalatoris also credited one other person for his success: Tiger Woods. The 15-time major winner, Zalatoris said, emboldened not only him but also the wave of other young players — Morikawa, Viktor Hovland, Matt Wolff, Scottie Scheffler, et al. — who have descended on Tour tee boxes seemingly undaunted.

“We were born kind of around when Tiger really started to take off, and so from 2000 to 2010 that was one of the best decades of golf ever, and we got to see it,” he said. “He’s one of the few guys that would turn a four-shot lead into a seven-shot lead. The reality is a lot of times you see more of guys having four or five and then kind of cruising or maybe make a couple bogeys and win by two or three, and Tiger just somehow always did it, to go from four to seven, when all of a sudden it seems like the last hour of coverage is just a coronation.”

If Zalatoris’s game keeps trending up, it won’t be long before he enjoys a coronation of his own.