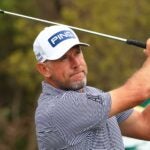 Lee Westwood hits his tee shot on Saturday on the 7th hole at Bay Hill.

The leader is 47 and will turn 48 in a month, and the players, he says, keep asking him when he’ll join the 50-and-over circuit. “I think they’re trying to get rid of me,” he said. Can you blame them? Here are three things you need to know after Saturday’s second round of the Arnold Palmer Invitational at Bay Hill in Orlando, Fla.

Lee Westwood, starting in 1998, has played 46 rounds at the Arnold Palmer across 13 appearances. Saturday was his best round at Bay Hill.

Bryson DeChambeau is one shot back

DeChambeau shot a 68, but it was his 20th stroke that stood out. On the 531-yard, par-5 6th, DeChambeau took a line over a lake and just right of the green with his tee shot, he raised his arms when it cleared the water — about a 340-yard carry — and he had just 70 yards with his second shot. He and Conners, the second-round leader, are one shot back.

“Oh, man, I felt like a kid again, for sure,” DeChambeau said. “It was exciting. Especially when you pull it off and you know — it was almost like winning a tournament. I don’t know. It’s kind of the feeling I had, it was like, ‘Oh, I did it.’ I got the same chills and feeling when I saw it clear and there was no splash. It was like, ‘Yes.’ I gave the fans what they wanted.”

Spieth, too, shot a 68, but it was his fourth stroke that stood out. On the 222-yard, par-3 2nd, Spieth’s ball landed just short of the green, and it trickled left and into the hole. He and Keegan Bradley, who shot a 64, the day’s lowest round, are two strokes back.

“I was trying to peel it left to right to hold the wind and land it a little right of the hole,” Spieth said. “I hit it a little thin, but it was right on the line I wanted and knowing that the grass was wet, you get some skid, I thought in the air it was going to be pretty good. Certainly not as good as it was. But I just wanted kind of one hop, because I just mishit it slightly — and a lot of times those are the ones that that happens, your perfect shots don’t go in, but then sometimes the ones where the unexpected. So that was cool. That was obviously a really cool moment.”

Rory McIlroy is four behind

Among other players, Rory McIlroy is four shots back after shooting a 72, defending champion Tyrrell Hatton is five behind after a 66, and Viktor Hovland is nine back after a 77.