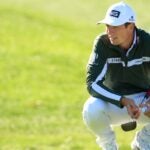 Viktor Hovland has been one of the hottest golfers on the planet over the past month. Starting with a T2 finish at the Farmers Insurance Open, Hovland has finished inside the top five in three straight events. And this week at the Arnold Palmer Invitational, he’s continued that stellar play as he sits seven under and just two shots back through two rounds.

Much of the success Hovland has credited to work over the past six months with his swing coach, GOLF Top 100 Teacher Jeff Smith. Together, the two have fine-tuned a powerful and reliable move that has transformed Hovland into one of the top ball strikers on the PGA Tour.

“He’s helped me a lot,” Hovland said after Round 1 at the Arnold Palmer Invitational. “I’m happy we’re, we have been together and we’re a very good fit, we kind of think a lot of the same way.”

One of the key changes Smith has implemented in Hovland’s swing has been encouraging him to not sway off the ball as much during the backswing. He’s still shifting his pressure away from the target during the takeaway, but his upper body is more stacked on top of his lead side. This reduced movement in his swing helps Hovland stay more consistent throughout and has resulted in some elite ball striking.

Another catalyst of Hovland’s success has been a renewed emphasis on course management, and he and Smith have drawn from an unlikely source to assist — playing poker. The two play the card game together frequently, dissecting the percentages and strategies and take those principles to Hovland’s approach on the course.

“We kind of think a lot of the same way,” Hovland said. “We play a lot of poker together and we like to talk poker. There’s a lot of take from poker and talk about with golf as well, because a lot of it is math and kind of stats.”

It’s an unconventional parallel between the two games, but the strategy seems to be bearing fruit. If the cards turn up in his favor this weekend, Hovland could become the Tour’s first two-time winner this season.