2021 American Express live coverage: How to watch Round 2 on Friday 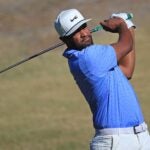 Tony Finau got off to a solid start Thursday at the 2021 American Express.

The opening round of the 2021 American Express is in the rearview, and now the stars of the PGA Tour will battle on Friday for a chance to play the weekend. Here’s what you need to know to watch the second round.

Tony Finau is one of the best players in the field at this week’s American Express event, and everything he did during the first round backed that up. After tickling Phil Mickelson with monster drives during a charity event on Wednesday, Finau took to the Stadium Course on Thursday and drained six birdies on his way to a four-under 68.

That leaves Tony four shots off the lead set by Brandon Hagy. Hagy played the Nicklaus Tournament Course on Thursday, and took advantage of the layout to shoot an eight-under 64. Through 18 holes, he holds a narrow one-shot lead over Byeong Hun An, with three players tied for third at six under.

Finau tees off for Friday’s second round at 12:40 p.m. ET alongside Matthew Wolff and Kevin Na on the Nicklaus Tournament Course. Other big names in the field, like Brooks Koepka (even), Rickie Fowler (one over) and Phil Mickelson (two over), will have to make up ground on Friday if they want to make the cut.

Below you will find everything you need to watch the second round of the 2021 American Express on Friday.

How to watch American Express Round 2 on TV

Golf Channel will air the action for the second round of the 2021 American Express with four hours of coverage from 3-7 p.m. ET on Friday.

How to stream American Express Round 2 online

You can stream the second round of Golf Channel TV coverage of the 2021 American Express on golfchannel.com. Fans can also view Featured Group coverage of the opening round all day Friday via PGA Tour Live, though you will need a subscription to access both options.

How to bet on the American Express — risk-free!