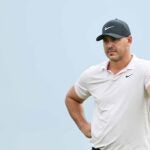 Brooks Koepka is back at the American Express after knee injuries hampered his 2020 season.

Last year did not go according to plan for most people. How could it — what with our lives upended, our trips canceled and our realities social distanced?

Much of the same can also be said for the golf world. The 2020 season brought with it a multiple-month layoff, fan restrictions, and a flurry of postponed or canceled major championships. The financial impact of the Covid-shortened 2020 season is only beginning to be understood, but it doesn’t require an accountant to see the PGA Tour did not avoid 2020’s wrath.

Suffice to say, many of us are hoping to return to the normal so crudely removed from our lives in 2020 — chief among them Brooks Koepka.

“I just put it behind me, I don’t really put too much emphasis on last year,” he told reporters ahead of the American Express Tuesday. “My confidence is still high. I’ve seen so many better results, so much better in my practice sessions now that I’m healthy.”

Koepka’s 2020 season was nothing short of nightmarish. Plagued by injury, inconsistency and frustration, the four-time major champion managed zero wins, missed five cuts and racked up only four top-10 finishes (and only one top-5). Worse yet, he descended to mere mortal status at the majors — squandering his Sunday leaderboard position with a final round 74 at the PGA Championship, withdrawing from the U.S. Open and finishing a distant T-7 at the Masters.

“My whole season last year was, for the last year and a half, it’s been an injury,” he said. “I couldn’t shake it, tried to play, adjust my schedule, tried to play through it and injuries attract other injuries and that kind of sums up the season.”

Koepka’s woes date back to 2019, when he re-injured his surgically repaired knee on wet concrete at the CJ Cup. Months later, Koepka tore a labrum in his hip compensating for his knee, which only worsened the issue. In September, he withdrew from the U.S. Open at Winged Foot in order to give his body more time to heal from a series of platelet-rich-plasma (PRP) injections.

By November, he emerged a new man, racking up consecutive top-10 finishes (as many in a two-week stretch as he had all year prior). And now, at the beginning of the new year, Koepka says he’s finally beginning to put the injury that destroyed his 2020 season (a partially torn patellar tendon) behind him.

“Went and actually had another round of PRP on my knee about two weeks ago, just to make sure,” he said. “They did an ultrasound on it, they said there’s barely any tear on it, so there’s a lot of progress, came a long way, a lot of hard work, but just excited where it’s probably the best I felt maybe since 2018.”

A fully healthy Brooks Koepka is a scary proposition for much of professional golf, which is on a streak of five consecutive first-time winners in majors since Koepka won his second PGA Championship in May 2019.

“I’m pretty excited now that that’s kind of in the past, it’s a good feeling,” he said. “Everything’s healed up, it’s good. I’m so much stronger in my legs. My knee, there’s, I’m not in pain two months now on anything, in the gym, walking around, waking up in the morning, it doesn’t ache. So it’s a good feeling.

The only difference between Brooks Koepka and the rest of us? His goals for the new year look a bit different.

“A couple wins and a couple majors,” he said.