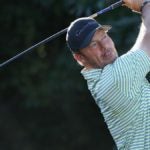 Alex Cejka is on some tear.

While a majority of professional golf has been shelved since mid-March, a few mini tours around the country have continued operations. In that time, Cejka has found a groove competing on the Arizona-based Outlaw Tour. Two weeks ago, he took the crown at the Arrowhead Classic. The 49-year-old continued his heater into the Parker Open last week and capped it off with a dramatic victory.

Cejka trailed Ed Olsen by six strokes with six holes remaining in the Parker Open; he closed with a fury. He birdied the 13th before carding an ace on the par-3 14th. He followed his hole-in-one with birdies on 15 and 16 to pull even with Olsen before pars on the final two holes. The two men then faced off in a playoff that Cejka won to clinch the $4,125 check.

Pretty impressive stuff from the PGA Tour journeyman. Over the course of his career, Cejka has cashed over $12 million in earnings on the course, including a win at the 2015 Puerto Rico Open. Yet here he is, mid pandemic, slogging it out on the mini tours. Talk about grinding.

While the two-week run might not be Tiger-Woods-early-2000s dominant, in the context of our current PGA Tour-less world, it’s the closest thing we’ve got for the time being.

The Outlaw Tour continues this week with the GCU Championship, although it appears Cejka is not in the field. The three-peat will have to wait.

2020 Zozo Championship live coverage: How to watch Sunday's final round