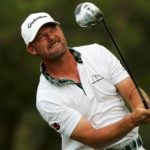 Alex Cejka has played in three events over the past month, finishing sixth one week, then winning the other two.

Alex Cejka, who estimates he has won about $20 million in his long career on the PGA Tour and the European Tour, was on the phone, doing a little mini-tour math. He had played in three events over the past month, finishing sixth one week, then winning the other two, good for about $14,000. With his transportation costs, lodging, entrances fees and caddie fees, did he make more than he spent?

“Made more!” the 49-year-old pro said with obvious enthusiasm. Cejka is to golf in his native country, the Czech Republic, what Seve Ballesteros is to golf in Spain. Golf royalty.

“My wife caddied for me one of the weeks, and I walked the others. No flying; we’re doing all our traveling in our RV. The campsites are about $20 a night. The three entry fees are under $1,500. Ahead,” he said. “For sure.”

Money, was by no means, his main motivation. He has Past Champion status on the PGA Tour. He has better status on the Korn Ferry Tour. He turns 50 on Dec. 2 and plans to play the Champions Tour full-time.

“I couldn’t play in Las Vegas,” Cejka said. He and his wife, Alyssa, have a home there, a home in South Florida and a home in Prague. Plus the RV! Not having any children explains some of that. As does $20 million in career money, plus all manner of side income.

“I went to Phoenix to see what it was like to hit a golf ball after six weeks, then heard about the first mini-tour event when I was there.” His English is perfect. His ponytail is intact.

“There’s a big difference between golf on the range and in competition, playing kids who are 23, who hit it 320, who are great players and hungry. I was rusty,” Cejka said. Hence, the sixth-place finish, amid social-distancing rules.

Good players are everywhere, Cejka will tell you. The difference between the players who make it on Tour and those who toil in golf’s minor leagues is a knife’s edge. “You can’t tell after one round, but you can tell after three,” he said. The events he played were 54 holes. It’s no one thing, he said. It’s attitude, confidence, mind, the lack of a weakness, an excellence in a particular area. Plus, he said, “the Tour player knows how to turn it on.” There’s a whole world, in those sentences.

Cejka did most of his growing up in Germany, and Bernhard Langer was his first golf hero. They have played often together, in various team competitions in practice rounds. They’re friends, and they speak in German. “If we’re playing two English-speakers, we like that, because they have no idea what we’re saying,” Cejka said.

The closest Cejka came to making a Ryder Cup team, on points or as a captain’s pick, came in 2004, when Langer was the European captain. But Cejka didn’t make it on points, and Langer picked Luke Donald and Colin Montgomerie. Cejka was not upset. “Whatever is best for the team,” Cejka told Langer, as he recalled it. Cejka plays golf for the payday, and to see the world. He watches the Ryder Cup on TV.