Tour Confidential: What will be the biggest adjustment for players when the PGA Tour returns? 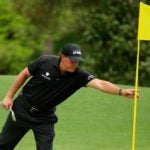 Phil Mickelson reaches for the flag stick during the 2015 Masters, a move that may be off limits when the PGA Tour resumes.

Check in every week for the unfiltered opinions of our writers and editors as they break down the hottest topics in the sport, and join the conversation by tweeting us @golf_com. This week we discuss what the hardest adjustment will be for players when the PGA Tour returns, the differences between the big tour and the smaller tours, playing without tees, and more.

1. Canadian pro Adam Hadwin told TSN he would rethink returning to the PGA Tour after its hiatus if players are forced to putt with the flagstick in, one of the safety measures the Tour is looking to enact. This followed similar comments by Scott Stallings, who told GOLF.com he could see some of his peers pushing back against such precautions (which we discussed in this forum last week). When the PGA Tour resumes, what do you think will be the hardest thing for players to adjust to, be it a safety-minded course set-up tweak, playing without fans or something else?

Sean Zak, senior editor (@Sean_Zak): Not sure how difficult this will be to adjust to, but I think convincing themselves that they’re still playing for millions of dollars when there’s no clapping, no emcee introducing them, no people to react with a fist-pump toward. I think the top 15 players in the world, who have played with fans forever, will take some time adjusting to quiet rounds for the same money.

Josh Sens, senior writer (@JoshSens): The whole vibe of the first events will be an adjustment. The rhythms of daily testing. The social distancing between player and caddie. The lack of fans to add electricity to the atmosphere. All of that will add up, but as Sean says, in the grand scheme, it all seems pretty surmountable. I would think the biggest worry would be for the guys who have to fly commercial to get to the events. On the course itself, something tells me guys like Hadwin and Stallings will get over their reservations pretty quickly.

Alan Shipnuck, senior writer (@Alan_Shipnuck): All of it! The typical pro is persnickety in the extreme. They’re all about routine and suddenly every little detail of Tour life is going to be radically different. It’s going to be a huge adjustment.

Dylan Dethier, senior writer (@dylan_dethier): Y’know that thing Brooks Koepka talks about where majors are especially easy to win because so many guys won’t be able to handle the moment? This might be the exact opposite of that. There’s gonna be a weird mini-tour vibe and a complete lack of atmosphere. Not ideal, but hey, we’ll take what we can get!

2. Tiger Woods said in an interview with GolfTV that if he could go back in time, he would tell himself to lay off the running. “Running over 30 miles a week for probably my first five, six years on Tour pretty much destroyed my body and my knees,” Woods said. Were you surprised by that answer?

Zak: I was surprised by how matter-of-fact he was with it. He’s totally convinced a lot of his body issues came from running so much. I’d guess it was less the running and more the shoes or what he was running on, or the armed forces training he put himself through.

Sens: Not surprised. A few years ago, I spoke with the doctor who did Tiger’s fusion surgery. He told me that golf was the second-worst thing you can do for your back. I asked what the worst thing was. “Running,” he said. I’ve got to figure he told TIger the same thing.

Shipnuck: It’s noteworthy because Woods is so rarely candid about his body and injuries. But there are still some missing elements to this revelation, like him running in a weighted vest in combat boots!

Dethier: Yeah, it was weird and surprising to hear Woods be self-reflective like that when he so rarely is. He refers often to the glory days of working out like a madman, but I’ve never heard him say that maybe some of that was over the top. Curious how he came to that conclusion, too.

3. In a video that Scott Hend posted to his Twitter feed last week, the Aussie pro said the best way to solve pace-of-play woes on Tour would be to do away with warnings. Just fine the players. That opinion has been voiced before, but Hend also added of slow pokes, “Don’t ever tell me the guy’s a nice guy, but he’s slow. There’s no such thing. A slow player is a guy who thinks about himself and himself only.” Agree?

Zak: Love it! Only I think players are taught to think about themselves and themselves only. As always, what the Tour needs is full transparency. Sharing slow play data and names with the media would include sharing it with fans and would make everyone in the sport consider how much time they’re taking.

Sens: I don’t know about nice or not, but definitely self-involved. And definitely not a fun person to play golf with.

Shipnuck: Hend is on the right track, but it’s really an issue of selfishness. And no doubt slow players are very, very selfish.

Dethier: Sure, but isn’t the whole point that fines aren’t enough? The no-warning penalty stroke would be the true key to combating slow play. But I confess that these issues seem sort of strangely small when we’re trying to figure out how to play any sort of tournament, at any speed.

4. Czech legend Alex Cejka has been burning up the mini tours, winning twice and finishing sixth in three recent starts. In speaking with our Michael Bamberger, the 49-year-old explained what he sees as the biggest differences between mini-tour pros and Tour pros, citing attitude, confidence, a strong mind and having an exceptional talent in one part of the game. He also said, “The Tour player knows how to turn it on.” In your mind, what most separates farm-league golfers from those in the big leagues?

Zak: The confidence of an absolute reset. Pump a drive right and OB? No problem, I’ve done this hundreds of times on this elite level before. I know how to groove one. Then I groove one. Refusing to let any adjacent thoughts creep into the millions-of-shots muscle memory is how they remain in the 99.9 percentile. At least that’s what this amateur caddie thinks.

Sens: Another (somewhat relevant) personal story. I was once getting ready to tee off at a course in Palm Springs when a pony-tailed guy came up behind me on a cart. It was Cejka. I asked him if he wanted to play through. He said, “No. I want to watch you hit, man. I want to see how you handle the pressure.” He smiled and motioned for me to have it. So I went to my bag and grabbed a 3-wood, the conservative option. And Cejka said, “What? No driver? What? Are you scared? If you’re scared, why don’t you go home and play canasta with the wife?” He was grinning, but he was mostly serious. And he really did say, “the wife.” I guess the point is: inner-swagger and self-belief. It’s a great differentiator in all sports. Also, I don’t even know how to play canasta. So guys like Cejka probably have that on me, too.

Shipnuck: These are excellent answers, but I’d also add the ability to hole putts. At the many FKT or LAT events I’ve been to, you hang out on the range and all the swings are Tour-quality. But walk the course during tournament rounds, and there are a lot of suspect putting strokes.

Dethier: As a former mini-tour flameout who was always notably worse than the best pros around me, I think Zak is close to the right answer. Irrational confidence is a major asset. Mini-tour guys tend to let one bad break, bad shot, etc., derail an entire event. They’re conditioned to things going wrong. Not so much for guys who’ve experienced so much success at every level. I love seeing these showdowns, though, and we’ll continue to see a few more guys try out the Carolina Mountain Tours of the world in coming weeks.

5. On GOLF’s Subpar podcast, John Daly said that he believes his reckless behavior in the early-1990s likely cost a chance to represent the U.S. in the Ryder Cup. Is Daly the best player in the Ryder Cup era never to have played in the biennial matches?

Zak: Well, besides the international players, yeah. But I don’t exactly blame those who didn’t pick him. Looking simply at results, JD wasn’t exactly racking up the top 10s outside of his major victories. And he wasn’t really contending in majors otherwise. Should he probably have made it? Yeah, but you can’t point to his behavior as the only thing that kept him off the squad.

Sens: Not sure. But I think his reckless behavior probably hurt his chances to simply qualify for the team.

Shipnuck: Properly answering this would require actual research, which violates the norms of the at-home orders. But there is zero doubt Daly torpedoed his chances with his bad behavior – a couple of Team USA stalwarts told me that point-blank in the mid-’90s.

Dethier: He seems a likely guy for best ever without a Ryder Cup appearance, which brings to mind the best active players who’ve not yet made a team: Gary Woodland, Kevin Na, Billy Horschel, Kevin Kisner, Shane Lowry, maybe Bernd Wiesberger? And Tony Romo, of course. Maybe 2022.

6. Earlier this week, Nick Faldo suggested on a podcast with Geoff Shackelford that banning tees would be one way to solve the distance problem. “It’s about the quality of the strike,” Faldo said, “And [playing without tees] would bring in a little more inconsistency.” If the 100 best players in the world played a tee-free event, who most benefits and who most suffers?

Zak: I think the elite ball-strikers would obviously play well. Your Adam Scotts of the world. I’d also expect an imaginative, gritty scrambler like Patrick Reed to hang around on the leaderboard. Who suffers the most? Probably DJ (distance a bit neutered) and Brooks (not a major, after all).

Sens: As a dominant iron player with ridiculous mental toughness, Tiger benefits from a change like that. And I suppose anyone who leads the Tour in strokes gained off the tee (Sergio Garcia, Cameron Champ, Bryson DeChambeau and Rory McIlroy are currently among the top) has some of their edge taken away.

Shipnuck: Lots of players would be affected! Think of a guy like Justin Thomas, who sends his drives to the moon with a high launch angle. His whole swing has been built to maximize the efficiency of teeing his ball up at ankle height. That’s the modern game so taking away the tee would be a pretty profound change.

Dethier: JT’s a great call, especially with his sketchy history hitting driver off the deck. Bryson’s long-drive philosophy would require tweaking. I wonder if Webb Simpson would suffer hitting hybrid-hybrid everywhere. Rory’s a tempting answer, but he can still hit 3-wood 310. It’s an incredible idea, though. The more stinger 2-irons, the better.

If two 15-handicappers played for $1 million, would you tune in and watch?